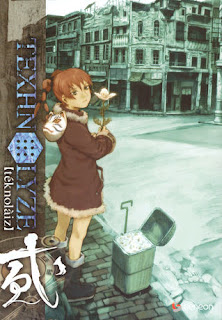 The era of cyberpunk anime has come and (some might argue) gone. From the mid-1990's to the early 2000's, the medium saw a huge glut of Blade Runner-inspired cartoon TV series and films exploring the depths of human nature and technology's part in our lives. Smack in the middle of this techno-human revolution are the works of Chiaki J. Konaka and Yoshitoshi ABe, the writer-illustrator team best known for Serial Experiments Lain. In an epic 26-episode collaboration with studio Madhouse, these two men created Texhnolyze, a dark thriller that comes off as being a little too punk and not enough cyber.

Ichise is a prize fighter who's down on his luck. Not only does he live in the filthy, dank, dangerous underground city of Lukuss, but he's also just had his right arm and leg cut off by some members of the ruling class, the "Organo." A beautiful doctor takes him in, and outfits him with cold, mechanical replacements limbs in a process called "Texhnolyzation." Though this process is reserved for the upper class, Ichise is incensed at Doc's decision, and immediately escapes her lab. Unfortunately for Ichise, however, a visitor to the city named Yoshii is beginning to stir things up among the mafia-like Organo, a religious sect called the Salvation Union, and the street gang the Racan.

Ichise soon finds himself among the ranks of the Organo, trying desperately to fight for his life and his future in a city thundering down the road to madness. All the while he attempts to track down a young girl named Ran living outside the city limits. She is a legendary seer who apparently has the power to determine the fate of the city. In this brutal scenario, the stories of Ichise and the people he meets carve a sad, gruesome tale of dreams, pride, and loss.

The writing in Texhnolyze is as complex as it sounds. Like a Serial Experiments Lain without its cyberculture bite, this show is a much more traditional dystopian tale. Even though humanity has developed technology to fix their own bodies, everything in Lukuss, from its buildings to its people, is broken down and dilapidated. This becomes the primary concern of Texhnolyze as soon as we see Ichise's tragic 3-episode battle to simply walk after his incident. Hell, he even spends an entire episode in a daze at the bottom of a staircase, willing himself to get to the top.

The script is painfully convoluted, sometimes with important information, and sometimes with useless psychobabble. Comprehending the hierarchy of the various factions in Lukuss is essential to an understanding of the show, so viewers will unfortunately be forced to hang on every word in order to make sense of the dialogue. Exacerbating this is an irritatingly unbalanced dub track, and no dubtitles to back it up. Still, if you can navigate through the problems and understand the story, Texhnolyze manages to be surprisingly engaging, especially in its final act.

ADR Director Jonathan Klein provides for a fairly entertaining dub, capturing the depression and lost hopes of the city of Lukuss. Justin Gross and Carrie Savage get their rather emotionless jobs done as Ichise and Ran respectively, but the ones to look out for are Onishi (leader of the Organo) and "Doc." Patrick Seitz puts out a very cool, powerful persona as Onishi, while Victoria Harwood is sexy (and British) as Doc. To my delight, the DVDs also come with some mildly funny parody dub lines the guys in the studio made for each DVD.

We have come to expect big things from Madhouse, and Texhnolyze does not disappoint on the visuals. The dark, moody atmosphere of Konaka's script is effectively brought out in the brownish-gray color tone of the show. When, near the end of the show, we finally see a world other than the derelict Lukuss, the contrast is beautifully portrayed. Sadly, Madhouse dilutes the clean, stylish artwork with odd touches like a static screen overlaid on fight scenes and unnecessary rotated frames. This works with a cerebral show like Lain, but I think it's safe to say that a static overlay is unnecessary in Texhnolyze's well-drawn action scenes.

Yoshitoshi ABe's character designs are great as always, though they still suffer from being unrecognizable from each other when animated. Regardless, a choice few of the characters are distinctly recognizable, especially Onishi and the Lain-inspired Ran.

Texhnolyze is surely not for everyone. It has brutal violence, political intrigue, and philosophical questions, but as usual, Konaka's script skirts these issues and takes a roundabout approach. Thus, it is the approach, and not the content, that will probably turn most people off of this series. If you liked Serial Experiments Lain a whole lot, but thought it needed more bloodshed, characters, and episodes, you might want to give this anime a shot. However, if you're not into depressing stories about sad people in a sad, dirty city, Texhnolyze probably isn't up your alley.