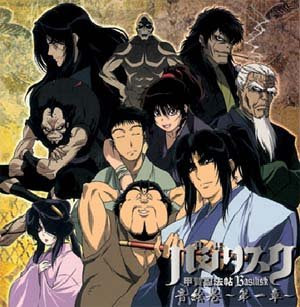 A time of ninjas and shoguns. The 400-year-old peace pact between the warring Iga and Kouga ninja clans has been abolished. Now, to decide the political fate of Japan, the top ten of both clans must battle to the bitter bloody end. Yes!

Tragically caught in the middle are Gennosuke and Oboro, leaders of each clan, who must bury their love and hopes of peace to carry out the bloody fate of their clans. No, not love! It’s West Side Story without the dancing. Yes! It’s Romeo and Juliet except Romeo could use Samurai Jack as dental floss! Hallelujah!

Basilisk, despite being a ninja show about ninja blowing apart other ninja using ninja techniques, is loaded with driven, believable and empathetic characters. By halfway through the series, when we are down to the final five on either side, trust has been betrayed, loyalties have been forsook, and slaughter is impending. Granted, the ninja powers defy logic in a way that would make Stan Lee blush, but it doesn’t worry about creating a magic system for the sake of marketing and video game copyrights. Sure, the old guy with the elf ears can stretch his arms infinitely and the paraplegic has a 12-foot sword down his throat, but so what – bloodshed!

The deaths can be just as sudden and surprising as the narrow escapes. You feel the imminent danger in every scene, and the consequences are palpable. These are awesome fights that are spaced out very well with compelling, though predictable, scenes of loyalty, fury, and startling compassion.

FUNimation grabbed a hold of this series as soon as they could, though its constant soft core rape scenes and oceans of blood will keep it off of Adult Swim indefinitely. I chose to watch the whole series dubbed, and it turned out far easier to follow than the subtitles. Though some characters seem mismatched, and the choppy rhythm falls short as it many dubs, it still holds together well. What hurts Basilisk is the melodramatic performance on both ends for the part of Oboro, who is sadly a flat, generic innocent girl, and there is only so much you can do with imaginative dialogue like, “I love you too much to fight you,” and “Anakin, you’re breaking my heart.” Hint, hint, George Lucas.

I didn’t expect much from Basilisk, but now I have seen its true power, and I will never underestimate Gonzo again.