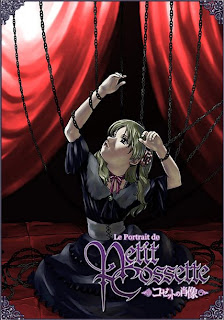 Like most things, the idea of Gothic has undergone an evolution. What originally started out as a term used to identify a barbaric Germanic tribe came to describe a specific style of European architecture and then became synonymous with written tales of horror and the fantastic in England and the USA. Given the visual nature of human-kind, it is not surprising that the mediums of construction and text could accept visual media as a blended brother. Furthermore, with the amount of communication and information readily available to any interested party in the current era, it is not surprising that what was once isolated has become global. With that global availability and the like-mindedness of human nature, the cross-culture adaptation of genres was inevitable (you’re reading an essay about a Japanese anime based on European tradition as fawned over by a citizen of the USA after all).

Shojo anime and Gothic tales seem like brothers separated at birth in the respect that both have been considered intellectually lighter mediums that address issues of romance and the fantastic. However, where the “Gothic novel is a romance typically written as a long prose horror narrative that exhibits...qualities of doom and gloom as well as an emphasis on chivalry and magic,” a typical shojo anime is a romance typically written as a dramatic/comedic narrative stressing the humility and awkwardness of personal expression with an emphasis on a wealth of emotional frustration (Bedford, 149). Cossette no Shozo, directed by Akiyuki Shinbo and adapted for the screen by Mayori Sekijima, is a brilliant blending of both forms in that it forsakes everything inherently shojo, save the style of animation, in favor of telling a true Gothic tale in relation to its devices, characters, and settings/images.

If Gothic is to be considered as “[stemming] initially from a point of intersection between ‘realistic’ and rationally ‘unexplainable,’” then already Cossette no Shozo defies shojo tradition, which typically uses the explainable to bring about the ridiculous (Messent, 5). The premise, a young man (Eiri) falling in love with a girl who exists only in Victorian glassware (Cossette d’Auvergne), is pure fantasy. This fantastic notion is then colored gloomy by the Gothic aspects of decay, as made clear by the dust-gathering nature of antiques and the morbid nature of how the items came into Eiri’s possession, as well as the grotesque, with souls sucked bloodless and blood being spewed forth from inanimate objects, to “create an atmosphere of dread by combining terror with horror and mystery,” another Gothic mainstay (Thompson, 34). Another device of note is employed during the extractions of Eiri’s sins by Cossette.

Crucifixion, bloodletting, and the mental torture experienced by Eiri during the extraction of the hate given him via Cossette’s cursed objects evokes an element of Romantic Gothic, which “deals with the tormented condition of a creature suspended between the extremes of ... love and hate – and anguished by an indefinable guilt for some crime it cannot remember having committed” (Thompson, 33). First, it is Eiri’s duty, as explained by Cosette, to act as a sponge for the hate absorbed from the cursed objects that witnessed her horrific murder. He must also bear the pain of that hate’s extraction to lift the curse in the name of the love that he holds for her. Secondly, he also suffers from being a reincarnation of the man who killed Cossette, a fate over which he obviously had no control and the one that is the reason behind his required penance.

Premises aside, the characters in this story are hardly typical shojo. For one, Eiri is not the typical male love interest. He’s portrayed with an air of self-confidence, relates to and calmly interacts with his peers (male and female), and even carries around a certain aloof je ne sais quoi that defines his personality. Consequently, the definition of a Gothic hero is “typically a man known more for his power and charisma than for his personal goodness” (Bedford, 149). Even though he falls in love, and that fulfillment is what the story hinges upon, the coloring of the events and situations needed to be contended with along that journey is what defines this tale as Gothic instead of shojo.

Similarly, the heroine in this tale is a ghost: not an oft-used archetype used in shojo. Furthermore, the ghost is not fawning over Eiri because she thinks he is cute or because he has swept her off her feet by any other means (other than, perhaps, lifting her glass off the counter). Instead, Cossette is trying “to win his love without being destroyed in the process,” where continued solitude would constitute her mental destruction, and that is the nature of the typical Gothic heroine (Bedford Gloss, 149). Also note the differentiation in that Cossette is not trying to love but rather just trying to win the love of Eiri as to fulfill her own plans. As a main character, this is most rare with shojo (a notable exception being His & Her Circumstances).

As far as imagery is concerned, the visuals of Cossette no Shozo alternate in wallowing between Rococo Romance and Gothic gloom. The modern-day Japanese antique shop setting, while not allowing for the Gothic architectural standards of “vaulted ceilings, ‘flying’ buttresses, and pointed arches,” does manage to integrate the four forms of painting to which the ... Gothic style was applied: frescoes, panel paintings, manuscript illumination, and stained glass (Bomarito, 475). The flashbacks to Cossette’s past and certain areas outside the main setting of the antique shop, however, abound with the typical architectural elements as well as Gothic decadence.

Aside from the appearance of specific types of art within the story, the surrealistic images used to depict the purgatory in which Cossette waits directly reflect the macabre and grotesque nature of the Gothic. Here, skulls, blood, and chains abound at every turn and flow over every edge. Religious images (crosses, mainly) also appear repetitively, acknowledging the fact that Gothic was, in part, a reaction to and recollection of values in The Ages of Faith and a celebration of what Romantics would call a freedom of spirit.

Cossette no Shozo is a fantastical story filled to the brim with art, blood, and period architecture. It is focused around a decadent (often-times disturbingly naked) youth, who happens to be a ghost exacting her revenge on a boy who happens to be the reincarnation of the man who killed her. There’s your typical shojo anime. Oh, wait. No it’s not. Even though there’s a love, it’s enthralled to the Gothic traditions and therefore not at all what is expected of an anime. It takes full advantage of mysterious character, gloomy settings, and grotesque images to offer a story as true to an over-actively dreadful imagination as any writings of Edgar Allen Poe or Stephen King.