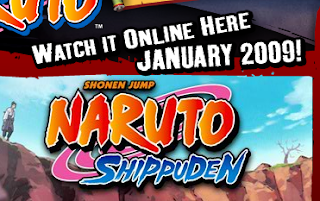 An executive at Viz Media must have had some sort of corporate epiphany just now. I imagine that it went sort of like this...

A couple years ago, a bunch of guys (in suits of course) are sitting down at a long table, just like in the movies. "Listen guys, we need a way to really sell this Naruto thing to the kids here in America! It's about ninjas and headbands and jumpsuits and ramen!

"Well," remarks one small, shy man sitting in the corner, "all the kids have already started watching Naruto online. If we just sell DVDs, we probably won't make very much money--"

But another man interjects, telling his boss a brilliant plan about TV deals and merchandise and headbands. Inspired, his boss seals the deal without hesitation.

It's 2008, and the shy little man sits down at a table again, looking over the sad faces trying to figure out what to do with a dying anime industry.

"So... like I was saying before, guys," he begins, "how about we put this stuff online? Then we don't have to worry about it being stolen from under our noses. We can release subtitled Shipuuden within a week of its Japanese airdate, and publish the manga in America less than a month after it comes out in Japan. If we keep it going for a while, we can make Naruto fansubs obsolete."

His boss takes a look at him. "You, my friend, are a genius. Why didn't we think of that in the first place?" Before our poor hero can interrupt, the exec presses the big, red "WIN" button and is showered with the hot, smelly love of anime fandom.

Read the full press release, which may or may not contain any of the narrative details that I mentioned above. Also, go watch free Naruto Shippuden episodes legally on Naruto.com when they release January 2009.