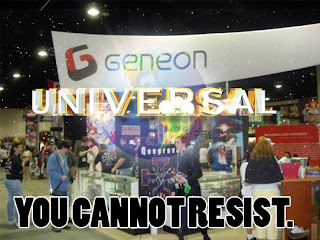 According to a press release from Japanese anime company Geneon's parent company, Dentsu, the latter will be selling a majority ownership of the former to Universal Pictures International, effectively making Geneon (yes, including the American division) a part of Universal, one of the largest studios in the United States. At the end of November, Geneon Entertainment will join Universal Japan, where it will most likely continue to distribute Universal's films in Japan.

What does this mean for anime fans here in the U.S.A.? Well, I would think that Geneon's status in the American market probably won't have a chance to regain its former glory. Their anime distribution department in America has ceased operations, so a huge Geneon comeback is quite unlikely.

However, since the dead American wing of Geneon is owned by proxy by Universal Pictures here in America, this merge could have a positive effect going into the future. Think of the fact that FUNimation is owned by large, profitable company Navarre. If Geneon can begin to distribute anime in America again (even if only in small quantities), Universal can surely keep it going throughout good times and bad, as Navarre has done for FUNimation.

[via a geek by any other name]