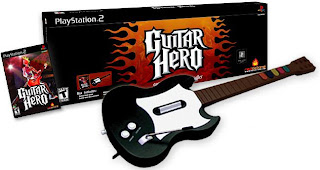 Every month, Evan Minto writes "The Everygamer," a column about video games for the casual audience. The article has been posted with permission from its original source, The Alternative Press.

Forget about Halo. Forget about Grand Theft Auto. If you’re looking for the games that all of the kids (and the adults) are really playing this year, look no further than Guitar Hero and Rock Band. Still, one might wonder: Are these games the same thing? Who makes each one? Which one is better?

The story of Guitar Hero begins with Red Octane, a company primarily dealing with peripherals for games like the hyper-popular Dance Dance Revolution. The company moved away from dance mats in 2005 when they decided to develop a plastic guitar controller with five colored buttons. They wanted a great guitar game to go with their new peripheral, so they approached a relatively new game developer called Harmonix, and asked them to create a "great guitar game."

Harmonix gratefully accepted, and got to work on what they believed was simply a fun little pet project. (The game only cost $1 million, a small sum for a video game) Little did they know that they were putting together the pieces that would soon make Guitar Hero an international sensation: eye-catching colored notes, a bonus-point-inducing "Star Power" mode, a distinctive visual style, and, of course, the guitar peripherals.

Finally, on November 8, 2005, the world witnessed the birth of Guitar Hero, and it skyrocketed into popularity as one of the most well-known, accessible video games of its time. Harmonix quickly got to work on its sequel, which enjoyed equally high sales.

However, in June of 2006, massive publisher Activision bought Red Octane, and Activision’s rivals at Electronic Arts (EA) bought Harmonix in September. Of course, Activision and EA were not willing to work together on a third Guitar Hero game, so the Guitar Hero series continued under the development of Activision’s studio Neversoft. When Guitar Hero III: Legends of Rock was released, it enjoyed high sales but suffered much critique from reviewers.

Meanwhile, a new competitor was emerging: the new game Rock Band, created by none other than Harmonix, original creators of Guitar Hero. In the agreement between EA and Activision, Red Octane (now under Activision) was allowed to keep the Guitar Hero name, but Harmonix (now under EA) was allowed to continue to create Guitar Hero-style rhythm games. Hence, Rock Band used guitar, bass, drums, and a microphone to simulate a full band experience, and received huge praise from the gaming community when it was released late in 2007.

This year, Red Octane has followed suit with a new game, Guitar Hero: World Tour, that uses the four-player mentality of Rock Band. World Tour and Rock Band 2 (the sequel), released mere weeks from each other this Fall, and their striking similarities in gameplay, have many people confused as to which one is a better buy. Reviewers have been praising Rock Band and its sequel for a whole year, but how can they explain the high sales and popularity of Guitar Hero, even after Harmonix’s separation from the franchise?

For those of you who remain confused, there are some simple comparisons that can be made between the two games. First, there is a distinct difference in their aesthetics: Rock Band uses a sleek, polished menu style, while Guitar Hero prefers a more over-the-top, glam rock style.

The songs included on the discs are also a big question. Where Guitar Hero has been known for relying heavily on metal and glam rock, Rock Band has a reputation for erring towards more soft rock tunes. Though these reputations still remain somewhat accurate, both games have been attempting to alleviate these criticisms by offering a greater variety of music. One way they have done this is by using a DLC (downloadable content) system wherein users pay a small amount of money (usually $2) per song to download and play the song on their console. Rock Band has been providing downloadable songs in great numbers since 2007, but Guitar Hero’s service has just started, meaning that Rock Band has many more songs to choose from at the moment. Still, World Tour boasts a fun, but admittedly cumbersome, song creation mode to increase variety.

Finally, it is very important to note that the people who developed Guitar Hero and Guitar Hero II (the two most successful games in the franchise) are the same people who made Rock Band. Guitar Hero: World Tour is actually created by different developers, even though the name remains the same. In the video game industry, it is developers (Harmonix), not publishers (Red Octane), who truly shape a game’s design and style.

So, which game is better for you to buy this holiday? That is a question that I leave up to each individual person. If you get a chance, play one or both of the games before buying them, to get an idea of which one you like more.

If you have kids, they might not appreciate the more mature sensibilities of Rock Band, but they’re sure to have fun with Guitar Hero. If you’re an adult, you might want to hold out for a little bit until Harmonix releases their Beatles game (which runs on the Rock Band engine) next holiday season.

Regardless of the game that you choose, there is no evidence that the rhythm game fad will be wearing off anytime soon.

Evan Minto is a New Providence resident and freelance writer. When he's not melting his brain away watching Japanese cartoons and playing video games, he's writing about them on his web site, Ani-Gamers. You can reach him at Evan.Minto@TheAlternativePress.com.