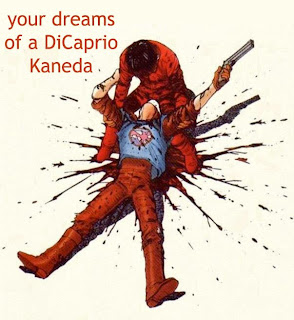 Leonardo DiCaprio, producer of the upcoming two Akira and one Ninja Scroll Hollywood adaptations, told MTV's Splash Page that he was "not really" interested in acting in the two projects. There you have it: Say goodbye any rumors of a DiCaprio portrayal of Akira's main character Kaneda.

In addition, DiCaprio spoke briefly about his own anime fandom and plans for the films, telling MTV:

“We’re waiting for the final draft of the script [for Akira] I’m a big fan of Japanese anime — that and another project called Ninja Scroll we’re trying to get developed and made into a movie, and I know there a lot of loyal fans out there of the project and die-hard fans, so we’re going to try to do the best job we possibly can and we’re not going to make the movie until the script is in the right shape.”

I'm quite glad to hear that DiCaprio is an anime fan, so hopefully he's not just "in it for the money." (But let's face it, there's some mad money in making an Akira movie.) Still, I was really hoping for DiCaprio to play Kaneda. As long as Appian Way can pick up some other big name actors for the projects, they might be able to sell these potentially-otaku-only titles to a large, mainstream audience. Anybody else as crazy excited as I am over the prospect of these Akira movies?