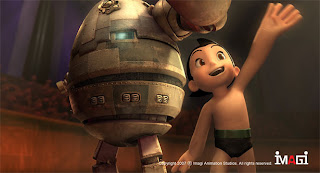 Remember a while back, when IMAGI announced that they would be creating a CG-animated remake of everybody's favorite super-powered kid: Tetsuwan Atomu, better known by Americans as Astro Boy? In the coming attractions before popular kids movie Madagascar 2, IMAGI showed off the first trailer for the upcoming film, displaying the first direct footage that we've seen so far. Moviefone's got the video, in shiny HD format as well as streaming video for anybody so inclined.

The CG in the film looks pretty competent, and the aesthetic style seems perfect to bring in a good family crowd, but I have some doubts about the accuracy of the movie. Primarily, the character designs have absolutely no resemblance to Tezuka's originals. I understand the goal of "Americanizing" the franchise to better sell it to a mainstream audience, but really? Tezuka? The "god of manga"? His character designs really don't need very much change. Still, I think that the plot (at least from Moviefone's summary) is looking to retain much of Tezuka's original message about humanity amongst all of the superficial changes made by the scriptwriter.

What do you think of the trailer? Sound off in the comments.