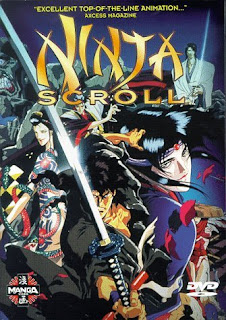 ICv2 reports that Warner Bros. has purchased the rights to create a live action film based on Yoshiaki Kawajiri's 1993 anime film Ninja Scroll. The original movie was one of the very first anime seen by many modern fans of the medium. Alex Tse, writer of the Watchmen script, is slated to write the screenplay for the film. According to a report from Variety magazine via the Anime News Network, Appian Way, the production company owned by Leonardo DiCaprio, will be co-producing the feature with Warner Bros. DiCaprio will not be playing a role in the film.

For those paying attention, you will know that Appian Way and Leonardo DiCaprio are also the ones behind the upcoming two film adaptations of Katsuhiro Otomo's manga Akira. And, for those of you keeping count, that makes seven live action anime adaptations in the works or released. What's your opinion on this 90's classic getting the Hollywood treatment? Are these live action films expanding or diluting American anime fandom?

[via Anime News Network and ICv2]