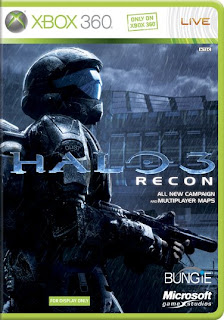 Remember when Bungie split off from Microsoft, and we all thought that the era of Bungie-made Halo games was finally over? Well, for those of you who crossed your fingers, waiting for a brand new, original IP from Bungie, get ready for a surprise (or perhaps a disappointing non-surprise). Microsoft Game Studios is publishing Bungie's newest project, a stand-alone Halo 3 pseudo-sequel titled Halo 3: Recon.

This disc will include "hours" of gameplay in the form of a new campaign called "Hell Jumpers," starring a brand new lead character. Bungie has also stated that the game will be a traditional Halo game, except with a bigger focus on "stealth" and "cunning." Before you worry yourself, Halo 3: Recon will also come equipped with all of the multiplayer components from Halo 3, as well as some new extras. No original Halo 3 game disc is required. Microsoft plans to release the game in the fall of 2009.