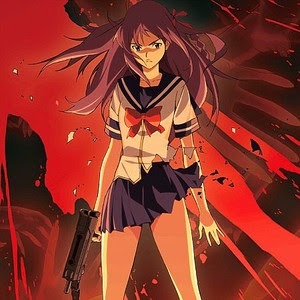 According to an Anime News Network tipster, American anime distributor FUNimation's YouTube Channel has scheduled the release of studio Gainax's (Evangelion, Gurren Lagann) latest project, Shikabane Hime: Aka, for "next week" (as of October 16th). The only episode currently planned is episode one, though more are surely to come. This unprecedented move shows a surprising willingness from FUNimation to bring their shows to Americans in record time; Shikabane Hime, after all, premiered just this month in Japan.

Shikabane Hime: Aka is based on Yoshiichi Akahito's original manga, Shikabane Hime ("Corpse Princess"), which portrays an undead girl who must collect 108 corpses so she can go to heaven.

Presumably, the YouTube video will be subtitled (there's not enough time to assemble and record a dub cast), and FUNimation will likely be releasing the show later to DVD. Regardless, this is a fantastic opportunity to watch a brand new show through totally legal means. Take them up on it, people!