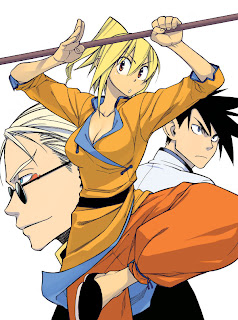 To be fair, Riku isn’t really “over-sexualized” to the degree you’re probably thinking. The self-contained stories go from one place to another really, really quickly though: humble young photo-hut-managing girl and her adoptive father get mixed up in some kung-fu ass-whoopin’ (which is their lifelong specialty, as it turns out) when an indebted lowlife comes begging for protection. Before you know it, ancient martial arts, namely Riku’s self explanatory “steel fist” technique, are the central focus on what appears to be another monster-of-the-week action tale.

The next thing you know... giant knockers, nosebleeds and teenage drama.

Luckily, the action is spread out to the point that it feels comfortable. The events in between Riku’s face-crushing antics involve helping out strangers who are in the smallest of predicaments, and it’s consistently entertaining. A couple unexpected twists mix up the short narrative, which apparently has no intention of ever going deeper than the “you hurt my friend’s feelings, now you’re goin’ down, pigman!”

Oh yeah – this is also a sort of fantasy world where “Demihumans” litter the planet. Whether they’re anthropomorphic cats or simply able to change the density of their fist, Demihumans help keep what might have been a standard-fare action manga a little more fresh. Though the prospect of furry-doujinshi is frightening.Despite Riku becoming a combat goddess when flaunting her humongous breasts (seriously – she becomes more powerful when they’re... out) the repeated jokes won’t faze you if you’re in to the bite-sized stories.

Steel Fist Riku is obviously made with an animated series in mind, but an overarching plot would have been nice. There’s a little bit of “I’ve got to find my biological parents” hinted at throughout, but nothing comes of it. Instead, what you get is a fun, decently drawn manga with a cool character who’s subject to silly jokes in a world full of likable characters. There’s more to be had from it for sure, and as an introduction it’s totally solid.

Plus, she punches furries in the face with a fist as hard as steel. What’s not to like?