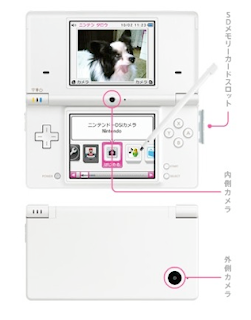 Now that most of you have probably manned up and bought your sleek little DS Lites, Nintendo wants to sweeten the deal (and fill their wallet) with the newest DS revision: The DSi will feature TWO cameras, one on the back of the top screen at VGA resolution and another next to the microphone, more along the lines of 0.3megapixels. The screens will now be slightly larger at 3.25 inches, and the device will be 12% thinner.

The new software capabilities will include SD cards compatibility (through a new SD card slot) and music playback. The DSi also comes with a currently-unannounced amount of internal storage. The most controversial change is the removal of the Gameboy Advance slot altogether.

Not only that, but Nintendo's rolling out new infrastructure as well. The DSi will have a web browser and the ability to send photos to the Wii Photo Channel. It will be able to connect online and download games directly over Wi-Fi from the "DSi Shop." Sound like another popular piece of electronics? Perhaps that's because Nintendo's Apple-inspired marketing and design team are just itching for some of that iWhatever action.

While Nintendo claims that this revision is a "third platform," we all know what they said about the DS when it came out and squashed the GBA. DS Phat and Lite owners reluctant to switch over should watch Nintendo warily so they don't get caught unawares by a surprise generational shift for the platform.

Finally, a Joystiq post confirms that according to Nintendo of America President Reggie Fils-Aime, the DSi will not be coming to the United States until "well into calendar year 2009." Too bad!