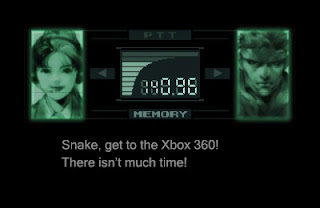 Welcome to our newest little project here at Ani-Gamers. For a new way of covering the news, we will now be changing our format so that bigger news stories get bigger coverage, and smaller news stories are placed in these "News Briefs" articles. After the break you'll find links to news articles and quick summaries for those of you too pressed for time (read: lazy) to click through and check them out.

Today, we've got an interesting slip of the tongue that may have just confirmed Ubisoft's current development of Assassin's Creed 2, Konami's continuing desire to bring Metal Gear Solid 4 to the Xbox 360, and a new national law that might spell doom for internet pirates everywhere. Read more after the break!

Assassin's Creed's Altair learns to swim for future project (Joystiq): In an interview with AusGamer, David Wilkinson (animation director for Prince of Persia) was talking about Alex Drouin, animation director for Prince of Persia: The Sands of Time and Assassin's Creed, when he was asked what Drouin is up to now. Wilkinson, in a classic moment of slipped tongues, replied, "He's busy making Altair even more beautiful. Last thing I saw him do was getting Altair to swim." There's pretty much nothing that you can glean from this except that there is a sequel to Assassin's Creed coming (as if that wasn't clear), and that the main character Altair will indeed be able to swim this time around.

U.S. Copyright Law That Allows Equipment Seizures Signed (Anime News Network): President George W. Bush recently signed into law a bill called PRO-IP (Prioritizing Resources and Organization for Intellectual Property), which will create a position known as the "Intellectual Property Enforcement Coordinator," in charge of tracking down and dealing with copyright infringers, much in a similar fashion to the War on Drugs.

An earlier version of the bill would have allowed the government to sue on behalf of rights holders, something that would put anime fansubbing in grave, grave danger. The most important point about the law is that it allows the government to seize any and all equipment (i.e. your computer) if there is evidence of copyright infringement, and sue again if any more infringing material is found therein.

Konami: 'We're actively looking' into MGS4 on Xbox 360 (Joystiq): According to Japanese investment research firm Morningstar, game developer Konami is "actively looking into a [Metal Gear Solid 4] release for the Xbox 360." We've known for a while that the developers of the hit game were thinking of bringing it over to the Xbox 360, but the recent multi-console movement among big games like Final Fantasy XIII just might push Konami to finally make the jump.