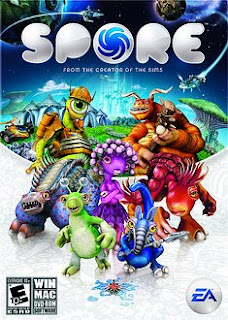 Evan Minto writes The Everygamer, a monthly column about games from a casual perspective. This article was originally published on The Alternative Press in September.

Earlier this month, casual gamers were hit over the head with Electronic Arts'' biggest title in years, the long-awaited Spore for PC and Macintosh. Like The Sims (also created by world-reknowned designer Will Wright), Spore allows players to create characters and control their actions in a huge simulated world. Unlike The Sims, though, Spore is what some might call an "evolutionary simulator." Players will create creatures in all different shapes and sizes, guiding them through evolutionary stages like "Cell," "Creature," "Tribal," "Civilization," and eventually, "Space," in which the beings will travel the galaxy in search of new planets and rival creatures to colonize.

If that sounds amazing to you, then you understand why Spore has been such a hot topic in the minds of everyone from the gaming community to the mainstream press since its announcement three years ago. You also might understand why the game has met with some high levels of controversy surrounding its early September release.

First, let's get the strangest argument out of the way. Some orthodox religious groups have called developer Maxis and publisher Electronic Arts out on their purported goals of teaching Evolution to children through Spore. While I fully respect people''s opinions on the Evolution-Intelligent Design debate, I think most people who actually play Spore will agree: the game is more of an Intelligent Design Simulator than an Evolution Simulator. After all, the game shows that animals and plants cannot be created without an intelligent hand guiding them along the way. I don't quite see why there is even an argument here.

Second is a debate that most casual gamers planning on buying the game are unlikely to hear about. Every Spore disc has been programmed with a Sony DRM (Digital Rights Management) software called SecuROM. DRM is one of the most hotly-debated topics in computer software at the moment. Apple is the greatest champion of DRM, with their iTunes service restricting song use to up to five computers.

In similar fashion, SecuROM allows only three installs for Spore. That all sounds good if you are only using one computer, right? However, how about when that computer dies and you lose your data, or when you want to install the game on a second computer in the house? Now you've used up your other installs, and your Spore disc is, for all intents and purposes, useless.

By now, you have probably figured out why so many people have raised objections to EA's DRM "solution." Angry gamers wrote scores of negative reviews of Spore on Amazon.com, most without actually buying the game, and the saddest part is that Spore will likely sell extremely well regardless. The game''s disappointing (but still fairly lofty) review scores aside, buying into this (frankly) screwed up plan will simply convince EA that they can continue to encode their games with SecuROM, and gamers both hardcore and casual will have to deal with the repercussions of a highly-restrictive DRM plan for many games to come.