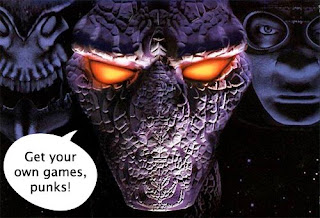 Admit it. You're gonna be spending your money on Starcraft II when it hits shelves next year. Even with this assumption already made, Blizzard, creators of the mother of all cash cows - World of Warcraft - has got another way for you to blissfully empty your wallet. According to a brief, vague announcement at BlizzCon 2008, Starcraft II will release as three separate games, each with a fully-featured single-player campaign based around one of the three races in the game: Terran, Protoss, and Zerg.

The three games, titled Terran: Wings of Liberty, Protoss: Legacy of the Void, and Zerg: Heart of the Swarm, will each feature 26-30 missions, and according to Blizzard each will "feel like its own epic story." To assuage fears of an episodic release schedule forcing people to buy all three, Blizzard reps also assured gamers that each title will be a self-contained story that does not require the other two games.

But c'mon, don't try to tell me that you're only gonna get the Protoss game! I know just as well as the executives at Activision Blizzard do that you, my friend, are going to buy all three games. On launch day. At midnight.