Welcome back from Labor Day, kiddos! You guys didn’t work too hard on your big day off, did you? I know I didn’t, which is why Up for Download is coming at you a day late this week and, not only that, this is probably the shortest one to date. All is quiet from the Xbox 360’s camp now that they’ve wrapped up their string of summer hits (the only thing I could gleam out of them was news of a patch in the works for Castle Crashers). PSN mostly just has The Last Guy, but we already talked about him; while this week’s biggest release comes to us from Nintendo of all places. 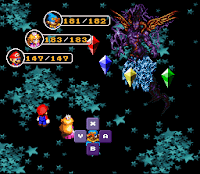 Super Mario RPG (VC, 800 Points): Another of the great RPGs for the Super Nintendo finds a home on virtual console this week. Back in 1996, Super Mario RPG was a completely out of left field collaboration between Square Enix (then Squaresoft) and Nintendo. Bringing together both worlds, the game had both the simple charm and solid controls of a Mario as well as the imagination and polish of a Final Fantasy. If you haven’t before, definitely check this one out today! 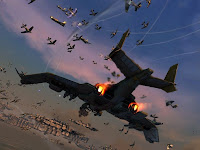 Warhawk Operation: Fallen Star (PSN, $7.99): Fallen Star is the third expansion pack for the online third person shooter Warhawk. The expansion can be purchased separately or, for those of us late to the party, as a pack with the other two expansions for roughly $16. The pack will include a new jetpack and some rebalancing of the older maps to accommodate the jetpack’s awesomeness. Oh, and don’t forget to snag the update that was released last week as well as it includes, among other things, some tutorials to aid those who really are late to the Warhawk party.

UPDATE: Naturally, right after I write up this post news breaks of Pirates vs. Ninjas Dodgeball, Shredded Nebula, and...wait for it...Gin Rummy all coming to XBLA this week! The post also comes right as I'm walking out the door to go to class; looks like you kids are going to have to do some homework on this one. Thanks Kotaku!