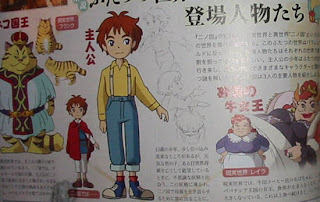 Japanese game developer Level-5 is celebrating its tenth birthday like you wish you could. It will be working with the acclaimed Studio Ghibli (Princess Mononoke, Spirited Away) on a new DS game entitled Ninokuni. The game, apparently some sort of fantasy or RPG title, will use a "Magic Master" book (akin to D&D) containing information on all of the spells and powers the game has to offer.

Studio Ghibli will be exclusively in charge of character designs, so expect a strong yet innocent girl, a boy who wants to protect her, some sort of homely old lady, and lots of animals. Everywhere. Level-5 also wants to release the game on home consoles, preferably with different content from the DS version. There are currently no plans for a North American release, but let's hope that we get one soon after Ninokuni releases next year in Japan.