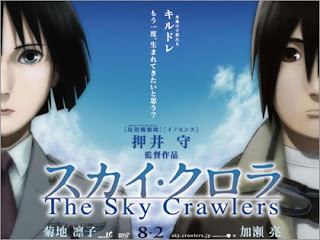 The Sky Crawlers, the newest animated film from acclaimed Ghost in the Shell director Mamoru Oshii, has been licensed by the Sony Pictures Worldwide Acquisitions Group. Presumably, this spells an American release from the major distribution house that brought us Paprika, Steamboy, and Metropolis.

The Sky Crawlers, the story of young children forced to fight high-tech wars as a part of a broadcasted game, was honored at this year's Venice Film Festival alongside Hayao Miyazaki and Studio Ghibli's Gake no ue no Ponyo (Ponyo on the Cliff by the Sea). The last time Oshii showed off his directorial talents (at least in anime) was in 2004's Ghost in the Shell 2: Innocence, so fans should be very excited to witness his long-awaited return to the animated scene.