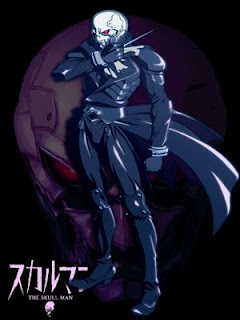 Nothing hits the spot like a solid mystery, a gripping horror story, or an action-packed descent into darkness. The Skull Man sets the bar for modern gothic suspense without relying on the convoluted, philosophical and psychological dribble barrage of such series as Boogiepop Phantom and Serial Experiments Lain. While both are great series in their place, The Skull Man combines a killer storyline with solid action and gripping, linear human pathos.

Our plot is as follows: Ootomo City has more skeletons in its closet than the house in Spielberg’s Poltergeist; one of those skeletons is ready to slaughter your ass.

The main story is told through the eyes of Hayato Mikogami, an ambitious, young and fearless newspaper reporter from Tokyo. He comes to Ootomo to investigate the serial murders of a mysterious “skeleton costumed” man who only appears after midnight. Once he arrives, his bad luck accidentally partners him up with Kiriko Mamiya, a teenage photographer with tomboyish charm to spare. Together, they uncover the links between the Skull Man, pharmaceutical companies, the resident cult, and the murderous mutants that prowl the streets during the night.

Sound like a lot to handle for a thirteen-episode series? It is, but only by keeping the mystery and the intrigue alive does The Skull Man handle itself so skillfully. As any well laid-out mystery goes, every scene, every moment, and every murder only opens the door to the next clue. When Ootomo City approaches midnight, citizens are locked in their houses and police cars patrol the streets, turning the city into a prison. For all its details, The Skull Man never loses the central mystery: the skull man’s true identity, and the reasons he terrorizes the city.

By episode two, Hayato meets Detective Shinjou, who tails him endlessly, convinced that Hayato is connected personally to the mysterious murders. Without his adopted uncle, a high-level bureaucrat watching his back, Hayato would be behind bars most of the series. With each new character they encounter, Hayato and Kiriko discover that the number of people they can trust is dwindling. Even at the halfway mark, when Kiriko’s true mission (not to mention martial arts skills) is revealed during a battle with her brother, is it clear that our characters are in desperately over their heads.

Hayato has a small network of people he continuously pumps for leads (though unsuccessfully). One lead is an old childhood friend who became the town priest, who guides Hayato in his quest to seek the higher power and truth behind the Skull Man. Another is an older P.I., whose wisdom and nearly Goku-level of perfect timing seems to have stepped from the pages of noire pulp comics.

Some of the lighter moments, especially those between Kiriko and Hayato (who share great moments in their struggle for dominance in their partnership) soften the mood just before the next murder or devilish plot twist occurs. Hayato’s constant confrontations with the Skull Man drive him to obsession to discover the face beneath the mask, even facing the dangerous specter down at gunpoint. By the halfway mark, it is clear that The Skull Man frames Hayato’s embrace of his inner darkness to battle the greater darkness of Ootomo City’s hubris and political corruption.

Sounds pretty epic, don’t you think? Just imagine all that and some werewolves and a small battalion of mechanized maniacal army clowns with flame-throwers and rocket-launchers. Now we talking badass.

Religious imagery, especially those dealing with light, darkness and resurrection, recur faithfully in Skull Man. For example, the secretive Byakureikai cult (literally meaning white bell association) is grooming a key character to be their new Eve in the world they aim to create. While Ootomo City prides itself in its ever-present military-police force, the city does hold a striking Babylon parallel complete with the tower. In the end, the Skull Man’s true purpose is to keep the executives of the pharmaceutical company’s power in check and dish out divine punishment to keep the citizens grounded. The Skull Man himself quotes Nietsche and Macbeth just to add to his creepy persona. Forget Tuxedo Mask from Sailor Moon or Buffy: the Vampire Slayer’s Angel, the title character of this anime is relentless, haunting, and holds more “badass” in his belt buckle than Blood +’s Haji has in his whole cello case. The black leather, spring-loaded sais, German Luger and glowing red eyes are enough to haunt even the most desensitized viewer’s dreams.

Besides being a mystery, The Skull Man is also easily categorized as super-natural with elements of horror. Studio BONES (who put out Fullmetal Alchemist and Darker Than Black and, by extension, have a direct link to my heart and wallet) assembled a patchwork team of directors and writers to compose this piece. With a lot of violence and intense moments, this series would find difficulty in a younger fan base. Its maturity and complexity limit its target audience and, thus, its interest from American dubbing companies.

While The Skull Man’s pacing mirrors The DaVinci Code and results in a stereotypical all-flash-and-zero-explanation ending that is inconclusive at best, it is still a very good mystery. Even the way its scenes are shot reveal something essential: characters over the phone, characters emerging from behind slightly ajar doors: Ootomo City can make any viewer feel like they are trapped in The Matrix. But I do offer fair warning that this is not a series with conclusive results. In fact, just to stay true to its own tragic nature, The Skull Man ends on a darkly lit here-we-go-again tone that shadows an even greater evil that will soon come to pass.

For all its red herrings, dead ends and McGuffins, The Skull Man still cranks out a great story with more layers than an onion and a great balance of horror, tragic desire and hair-raising action. How it handled itself so well is the real mystery.