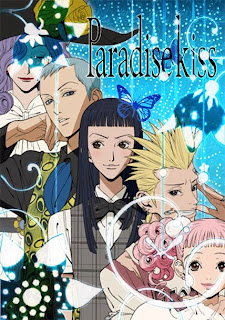 Disclaimer: This is a shojo. There are no ninjas or explosions; there is only fashion. E! did not get me interested in fashion: Paradise Kiss did.

Yukari Hayasaka is a bit of a stuck-up senior high school student: she studies hard to earn her B-average and is already bored with life. This comes to a crashing halt when she discovers a team of fashion school students who take her to their underground "workshop." Suddenly Alice has been tripped into a Wonderland of lace, butterflies, polyester, silk, clovers, and the bisexuals who design and wear them.

Paradise Kiss feels like an indy project from underground art school drop-outs. It can be described as a slice-of-life, coming-of-age story with a surplus of style and a forte of fashion. Its opening and closing themes, "Lonely in Gorgeous" and "Do You Want To" respectively, carry the show's youthful and vibrant energy, blasting you with colors, caricatures and craft. Many scenes morph between super-deformed and real characters in the same shots, giving great flexibility in the series' tone. The series also developed its own screen-wipe transitions of spinning flowers and mutated stuffed animals, which only adds to the pleasant aesthetic.

The characters are just as unique as their clothing habits. There's cross-dresser Isabella, the quiet idealist who dresses like the countess from a lost romance novel, Heart-stiched-on-her-sleeve Miwako, who is basically a walking piece of cotton (and eye) candy, and Arashi, the grumpy punk rocker, whose safety pin piercings are enough to make the cast of Hellraiser flinch. Finally there is George, the suave Prince Charming who leads his team the way Griffith led the Hawks from Berserk. The four form Paradise Kiss, their own line of clothing. The best part? George wants Yukari to model their final project.

Though reluctant at first, Yukari decides to test the waters of the world of fashion. After being given a new nickname of Caroline (or Carrie) by Miwako, she is reborn and redressed into a world she originally dismissed. In no time flat, she falls for the enigmatic playboy, George, and her dedication to the group's project becomes inescapably personal. In an attempt to abandon the mediocrity of her life at home and school, she moves into Arashi's apartment and seeks work as a fashion model. Through her new friends' stretch at nepotism, Yukari's good luck lands her at a modeling agency. But just before things get too out of hand, she moves in with George, and the two lovers become inseparable.

(This is the part where you all say "yikes!")

The most engaging aspect of Paradise Kiss is Yukari's challenging and complicated relationship with George, whose feelings are harder to interpret than the plot of Serial Experiments Lain. Does he really care about her decision to abandon her life for his ambitions? How will he use her after the project is done? Despite his debonair standoffish attitude and unreadable expressions, George holds himself with the impeccable charm and the faultless poise of a James Bond or Calvin Klein. He's so dangerous, you almost have to fall in love with him and hate yourself for it. Nevertheless, it is a story about young love, which is always passionate and fiery at first, but is quick to consume itself and become ash.

While the show concerns itself with fashion shoots, modeling agencies, and hair dressing, it never overwhelms Yukari's voice and perspective of this new and flamboyant world. Her narrative voice is self-conscious and borderline arrogant: in other words, the perfect high school senior. It is easy to see people disliking Yukari for her stubbornness and naivete, but her blossoming passion for love and George redeems her.

Paradise Kiss's treatment of sex, virginity and sexual identification plays a major role in its story-telling. It boils with rampant sexuality, though more subtly rather than crudely (think Romeo and Juliet rather than Colorful.) Many of the love-making scenes are treated with the classic Japanese fashion of showing objects in the room rather than actual nudity; this technique doubles the emotional weight of each scene.

While the dialogue can fall into many of the pitfalls of directly-translated manga-into-anime, the visual experience of Paradise Kiss is crisp and deep, each shot as carefully sculpted as an assignment on Project Runway. In the end, the conflict of romanticism and love vs. real world values leans with total bias toward the romantics and idealists (this is a shojo after all.) Though its commercial success in the states makes the final chapters hard to find, even on Ebay, it is a very pleasant show. Girls as well as boys who, like Isabella, think they're girls will enjoy the romantic treatment of first love.