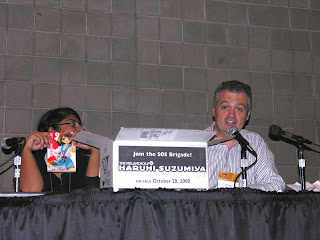 Yen Press, creators of the popular startup manga magazine Yen+, provided a panel much in the same vein as Del Rey's panel a day before. The beginning of the panel consisted of Rich Johnson bantering with Japanator reader Chris (a.k.a. KuronoK), a pastime which would become central to the panel. As is the case with Del Rey, bloggers like me LOVE Yen Press. Their informal, exciting, and funny panel started with a quick recap of the status of the Haruhi Suzumiya manga, which releases in three weeks. The light novels will release in April, and a sneak preview of them is in the back of the manga. Of course, there were a few (some might call it a giant box of) copies of the manga that Rich had happened to bring with him, so we would be winning them as prizes for answering questions.

Soon after that, Rich and his cohorts Kurt, Juon, Tania, and Abby went right into Yen's list of new titles. I've listed them below:

After that, the entire panel was composed of Rich asking questions, and giving copies of the Haruhi manga to those who got them right (or to random people who made a comment he liked). Chris had to wait more than half the panel for a copy from Rich, who took a sick (and hilarious) pleasure in depriving the boy. Eventually nearly everyone in the room who wanted one - including Chris - was given a copy, and Brad Rice even got the box that held them! Overall, the panel was a lot of fun, and the news was given in a refreshingly concise style, making it easy on bloggers like me.