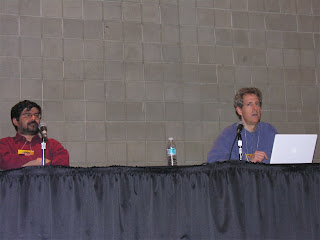 When I tell you about a manga company that starts with the letter V, I'm sure your mind will jump to a certain Naruto-carrying, Shonen Jump-ing publisher by the name of Viz. It seems like that mindset was in full force at the New York Anime Festival, where the showing for a panel run by Vertical, Inc. was dwarfed by every single other industry panel of the day.

The panel, run by Marketing Manager Stephen Vrattos and Editorial Director/Executive Vice President Ioannis Mentzas of Vertical, consisted nearly exclusively of old information. Even so, the guys didn't miss a chance to promote Black Jack, their newest manga from the gilded archives of Osamu Tezuka.

At the very beginning of the panel they announced a mini-contest, wherein everyone in the room gave their name for a chance to win a copy of volume one of Vertical's new special edition "Diamond Hardcover Edition" of Black Jack. On that note, the only new announcement made at the panel was that the second volume of this limited-print three volume series will be the Japanese story "The One That Remains."

The rest of the panel mostly involved Stephen and Ioannis going over Vertical's new manga, fiction, and non-fiction titles, including the cutesy series The Complete Aranzi Hour, some dark horror stuff (Biogenesis, The Summer of the Ubume), historical fiction (The Blade of the Courtesans), and a range of non-fiction (Sayonara, Mr. Fatty! A Geek's Diet Memoir, North Korea Kidnapped My Daughter).