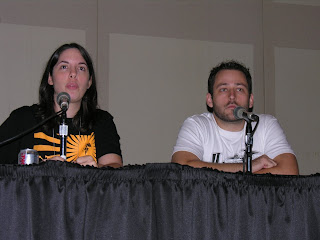 Surprisingly, Saturday at the New York Anime Festival was not as hectic as Friday was. With more panel time during the day and hence more time between panels, it was much easier for my bloggers-in-crime (Brad, Gia, Scott) and I to get from panel to panel and still have time for, you know, food and actually enjoying ourselves.

Joe Chagan and Merideth Mulroney from Media Blasters began their panel with two points; points which would become the center of their entire message:

Other than that, the two friendly representatives opened themselves up for questions, giving surprisingly candid and telling answers that you can only get from Media Blasters and their unique marketing style. First off, on Media Blasters' solvency in the dangerous climate of today's anime market, Merideth reminded us that the company is "holding our own because we're feisty." The "big announcement" was hinted at being something involving a new title (i.e. NOT retro) that will make you go "holy crap, THAT ONE?"

When asked about a Blu-ray release for MB's remaster of Berserk, Merideth reminded us that regardless of high-def quality, "16mm is 16mm." She also clarified that the main reason for Seirei no Moribito's DVD release delay is that she still doesn't have all of the original artwork for the show after six months of waiting. Finally, the reps also plugged MB's new online card game Alteil (preview coming soon), and let us know that the company is/was interested in picking up Cream Lemon, Turn A Gundam, and Black Lagoon.

Media Blasters denies any plans for a unified anime channel with other companies due to the immense costs of running a television channel. They also say that a burn-on-demand plan will not work for a small company like Media Blasters until someone else makes a system that they can adapt for their own needs. 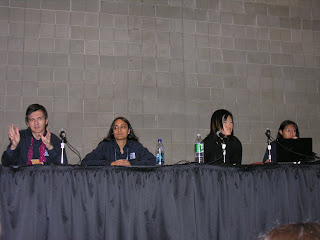 Unlike AnimeNEXT, at this Del Rey panel the company was up a proverbial creek without a not-so-proverbial Dallas Middaugh. Del Rey's charismatic Associate Publisher was unable to come to the convention due to previous engagements (i.e. his honeymoon), so standing in for him was the equally (if not more) charismatic Ali T. Kokmen. Del Rey, friend of the press, gave us the new announcements rapid-fire at the beginning of the panel, without all of that annoying suspense of other industry panels.

Most of the rest of the panel was spent answering questions and throwing squishy gavels at the audience to promote Del Rey's new Phoenix Wright manga license. Trust me, you had to be there for some of Ali's lines. Why is Del Rey so gosh darn awesome asks Japanator reader KuronoK? "Diet and exercise." We love you Del Rey. 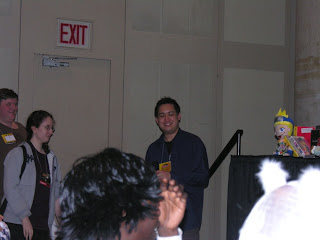 [EDIT: Gia let me know during Podtoid-san today that this was previously announced. Oops!] Quite ironically, there was also some news out of the center of anime news themselves, Anime News Network, during their (self-)celebratory 10th Anniversary panel. Namely, the web site, which has already pursued some mode of video presence on the web, will now be working to license new series from Japan and provide them online. There will be free, low-quality videos streaming on the web site, and $3 high-quality (presumably DRM-free) episodes, in a pricing scheme suspiciously similar to that of asian media site CrunchyRoll.

The only shows that will be on the service as of right now are three Media Blasters titles: Girls High, Kite Liberator, and Ramen Fighter Miki. While I'll admit my personal skepticism on their ability to pull this off, New Media Director and Founder Justin Sevakis says, regarding release dates, "simultaneous is our goal." Subbing before the show comes out? I think that requires a bit more leverage than ANN has over Japanese companies. Maybe I'm wrong.