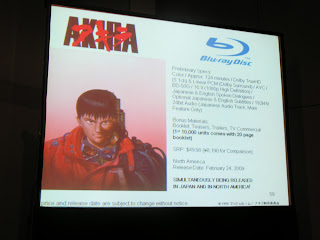 Today, on the first day of the New York Anime Festival, two of the American anime industry's biggest heavyweights, Bandai Entertainment and FUNimation, controlled a single panel room for a whopping three hours. Uncle Yo and I tag-teamed on the panels to get all of the big announcements.

The representatives from Bandai Entertainment and their Honneamise line (formerly Bandai Visual) started their panel with what they called an "un-announcement": Sola and True Tears, originally slated to be released by Honneamise, have, in fact, been cancelled. Then they spent around forty-five minutes discussing their new titles, including Code Geass R2 (on Adult Swim in October), Gurren Lagann, Gundam 00, Ghost Slayers (Ayashi), and Ghost in the Shell 2: Innocence.

Bandai manga will be releasing the Gurren Lagann manga series as a companion to the very popular anime title. Honneamise also announced (arguably) their biggest license yet: Akira. It will be rereleased under the Honneamise line for 49.98 on Blu-ray with 24bit Japanese audio and the English dub included in the Geneon release.

The final announcement came from Bandai Entertainment, who let us know that THEY would be releasing Sola and True Tears under their Anime Legends label. No price or release date was given.

Honneamise plans to release anime simultaneously in the US and Japan with lower US prices. When I asked Honneamise’s rep, Loy Fruel about the possibility this creates for "reverse importation" of American DVDs to Japan, he seemed unconcerned. "If it happens, it happens. We just want Americans not to import from Japan." 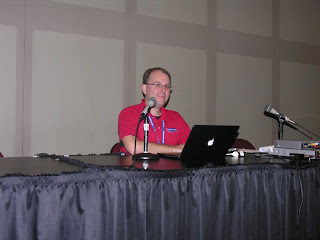 (Karl "Uncle Yo" Custer compiled the information for this panel)

While FUNimation has a lot to discuss thanks to their sweeping acquisition of former ADV and Geneon titles, there was very little new information to be had. The representative Adam Sheehan obviously talked about Hellsing Ultimate, Negima, Claymore, Ouran High School Host Club, and even some Dragonball Z (I know, right?). Darker than Black opened up the panel, with an energetic trailer featuring Yoko Kanno's prominent musical talents in center stage.

The biggest announcement of the panel was FUNimation's license of the Japanese Mushi-shi live action movie. On another note, Adam also hinted that Ouran might be available at AnimeUSA before it’s street date. After opening up the floor to questions, Sheehan finally moved on to a whole separate panel regarding the FUNimation Channel.

Continuing with his very candid style, Sheehan went into details of the channel's growing penetration into American television. His main point was that anime fans should be bothering their local cable companies to add the FUNimation Channel, even going to such lengths as requesting that people make threats like, "If you don't add the FUNimation Channel, I'll drown your dog." He also briefly discussed that Video-On-Demand services, currently only on Verizon FiOs, will soon be coming to other providers, like Comcast.

Sheehan also announced some brand new titles to the channel, including Burst Angel, Jyu-oh-sei, Black Blood Brothers, Solty Rei, and Negima!? (season 2). Of course, an entire series of Powerpoint slides was dedicated to the announcement of Ouran High School Host Club on the FUNimation Channel. There is "no date yet" for the show's premiere, but Sheehan estimates it to be sometime this fall.