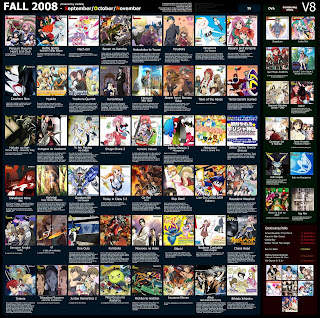 This fall anime season has got a couple of big hits, but I'm sure many an otaku has been on the lookout for some of the smaller series that might go under the radar. For your selection ease, an anonymous fan has compiled a giant visual list of this fall's anime titles (linked at right), with airdate, studio, a summary, and a picture for each one. Don't you worry, OAVs are included as well.

Some notable series include BONES's Xam'd: Lost Memories, a new Hokuto no Ken (Fist of the North Star), Gainax's Shikabane Hime (Corpse Princess), the second season of Mobile Suit Gundam 00, and the anime adaptation of Alive: The Final Evolution. What jumps out at you on the list? Let us know in the comments.