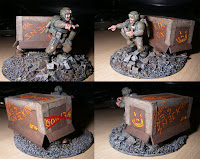 After giving us a few details on Warhammer Online’s pricing structure and release date, Mythic Entertainment and EA are now ready to announce that the open beta for their upcoming MMO will begin September 7th, 2008 – a little over a week before the title goes live. Those who wish to participate can do so by pre-ordering the game from select retailers listed on Mythic’s website here. Those who participated in the closed beta will automatically receive an invite as well.

"In just a few weeks, we are going to throw open our doors and invite more players into the game than ever before,” says Mythic Entertainment co-founder and general manager Mark Jacobs. “They will have a chance to delve into the open beta and see for themselves that WAR has arrived and it is glorious!"

Depending on where you pre-order you copy from you’ll also be entitled to different pieces of in-game equipment (and a $5-dollar off coupon if you go with Target). And while all 20 classes will be made available, the beta is not without its restrictions, which include a lvl.20 level cap as well as restrictions on what in-game content you’ll have access to. And remember, Orcs iz da biggest and da strongest!