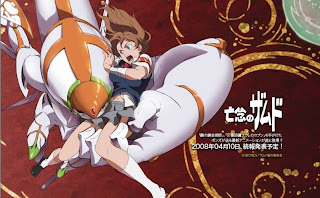 The following article was submitted by Rp Phantom. The opinions expressed below do not represent those of Ani-Gamers or its affiliates.

We all know the mecha genre. From Mobile Suits to Giant Robots to Giant Robots that are actually not even robots, an anime fan would think that, by now, the mecha genre has become formulaic and predictable. So, now that Eureka Seven has come and gone, Bones and Aniplex are back again, and they bring to the table yet another tale of an adolescent boy, giant airships, mechas, and living weapons. They bring Xam'd: Lost Memories.

So I bet you're asking, "So who's the new teenage boy who has to control these robots?" or "Who's the new mysterious introverted girl?" While Xam'd seems to fall under the mecha category at first, it is made clear from the start that the story does not revolve around mechas. Yes, there is a teenage boy, there is a mysterious girl, and there are airships. To set the record straight for Xam'd, here's an early plot overview.

The story begins on Sentan Island, a land of seemingly contradictory nature. It is described as isolated, but it is highly populated. It is apparently under military rule, but the citizens live in peace. Akiyuki is a teenager living on this island, living between his separated parents. He is a confident and amiable individual, and has a pair of close friends named Haru and Furuichi.

On his daily walk with them to the school bus, he spots a pale-looking girl named Nazuna who appears to be a new rider on the bus. The soldier guarding the bus has the students lined up to check their armbands, and he notices that this frightens Nazuna. He passively slips her his armband, to help her avoid complications with the soldier. He claims he forgot his, and is expectedly let on anyway because he is a familiar face.

This appears to me a dreadful mistake, as Nazuna detonates a bomb on the bus as he exits in front of the school, an apparent act of war. Several students are wounded and killed, and a strange light from the explosion hits and enters Akiyuki's right arm. Confused, he re-enters the blown apart bus and tries to help Nazuna, who is wounded and bleeding green blood. She apologizes for getting Akiyuki caught up in her actions, and offers to give him her lost memories: Xam'd. Nazuna touches Akiyuki, and a strange white liquid envelops his body, and transforms him into a monstrous creature. (Just like they said would happen in Catholic School).

Suddenly, airships from a belligerent military from the north drop super weapons known as "Humanforms" onto the island. These humanforms are like living attack vehicles, except the are behemoth in size. A passing postal ship remains nearby, examining the situation. On this ship is Nakiami, a mysterious young woman who takes interest in the humanforms, and even more so, the Akiyuki-turned-Xam'd.

Xam'd is compelled to fight these humanforms, possibly to protect Akiyuki's friends. After being destroyed, the humanforms start to crystallize and corrode apart before the victorious Xam'd. In no time, Nakiami swoops down to Xam'd, and traps him. He then starts to corrode in a similar matter as the humanform. Nakiami urges Xam'd to come with her if he wants to live. Xam'd obligingly collaspes and transforms back into Akiyuki, unharmed, leaving only a mutated Xam'd arm on his body.

Nakiami takes Akiyuki back to her postal ship, where she cares for him, and explains that he now requires training to control the Xam'd within him and to keep himself alive. From then on the stage is set as Akiyuki travels with the ragtag crew of the postal ship, while his friends are left to try to restore their devastated lives and homes, in a city that lies on the brink of warfare.

Xam'd brings recognizable qualities with something new to the table. Like their previous work, Eureka Seven, Bones's animation is flashy and fluid, and of course, action-packed. Even the theme song, "Shut up and Explode" by the Boom Boom Satellites is catchier than chlamydia. Overall, this new anime seems to have a lot of potential, putting a new twist on predictable sci-fi and mecha genres. Definitely worth watching.