The Summer of Arcade is now in full swing, and this week marks the release of Braid - a title which will probably be the hardest sell of all since it doesn’t have an “Evolved” or “Rearmed” or “HD Remix” after its name. Then we have the Virtual Console, which is a little less awful this week. Hopefully the WiiWare shooting gallery Wild West Guns will restore some faith in the service after last week's Pong Toss. Finally there's PSN, which has some slim pickings, but the Ratchet & Clank pseudo-sequel Quest for Booty and The Last Guy are both set for an August release!

Braid (XBLA, 1200 Points): From the mind of independent developer Jonathan Blow comes Braid, a title which promises to melt some brains with its bizarre, time-manipulating puzzles. The game will also be melting a few wallets with its hefty price tag ($12), but don’t let that discourage you from checking out the totally free demo for the new puzzle/platformer.

Sonic the Hedgehog (VC, 500 Points): I grew up with Sonic and out of all of his Genesis releases I’d say this one is the weakest. Compared to Sonic 2 and 3, the original is so much slower paced and focuses too much on the puzzle solving aspect for my taste. Though, eating all that Cookie Crisp and watching Power Rangers might have had something to do with that. 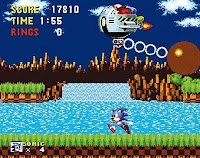 Splatterhouse 2 (VC, 800 Points): Now, unlike Sonic, I didn't spend any of my childhood slaying monsters in Namco’s side-scrolling beat'em up Splatterhouse. Released back in 1992, the series is now getting a next-gen remake and is also the first title on the Virtual Console to receive the M-rating. Alpha moms beware…

Wild West Guns (WiiWare, 1,000 Points): I watched George Stevens’ western classic Shane this weekend, and at no point during the movie did I see any of the following: flying sombreros, hot air balloons carrying TNT, or tiny men in purple suits rushing the screen. Obviously Mr. Stevens had no idea what the real Wild West was really like, unlike Gameloft’s shooting gallery Wild West Guns.

PixelJunk Eden (PSN, $9.99): Last week’s biggest demo is this week’s biggest game release on PSN. As the third installment to the PixelJunk series, continues the tradition of being a wholly different game from the previous titles. This time you play as a small speck navigating its way through a colorful and ever-changing garden by throwing yourself around and sticking to thing. Trust me, this one is worth a look!