This week in Up for Download marks the end of the Summer of Arcade releases, which is going out with a bang – or should I say a crash – with The Behemoth’s long awaited Castle Crashers hitting XBLA. Nintendo’s Virtual Console continues to drag itself along with Samurai Shodown 2 and Ys books I and II, while the truly unique The Last Guy sees a release on the American PSN. All-in-all I’d say it’s been a pretty good summer for downloadable titles, and here’s hoping for more of the same!

Castle Crashers (XBLA, 1,200 Points): At long last we laymen shall finally have the chance to enjoy the simple pleasures of crashing a castle. Much like The Behemoth’s first title, Alien Hominid, Castle Crashers is another beat’em up sidescroller with some RPG elements mixed in for good measure. Packed to the brim with four player co-op, lots of unlockable characters, and damsels in distress aplenty, this game is by far my most anticipated game out of this Summer of Arcade. 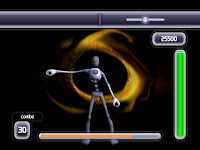 Helix (WiiWare, 1,000 Points): So let’s say you’re planning on buying one of these newfangled Wii Fit balance boards so that you can whip yourself into shape, but you can’t find one anywhere. Looking to fulfill your workout fix, you turn to Ghostfire Games’ Helix, a rhythm-action fitness title that has you holding a Wii-mote in each hand while you flail your arms out to trance music. In retrospect, you decide that jumping jacks are a better deal.

The Last Guy (PSN, $9.99): If you haven’t already checked out the demo for this title then what I’m about to say might not make a lot of sense to you. From SCE Japan comes a bizarre mash-up of a game that combines equal parts pac-man and zombies. The idea is that you are a caped crusader traversing the streets of some very high resolution satellite photos of major cities collecting a line of people who you escort to safety. Needless to say, there are lots of zombies and other monsters who are trying to stop you.

Kratos for Hot Shots Golf (PSN, $1.99): If you’ve been enjoying Hot Shots Golf: Out of Bounds, but find that it just isn’t…well…angry enough for you then why not toss in God of War’s Kratos to kick up that rage factor; puts John Daly’s putter throwing to shame.