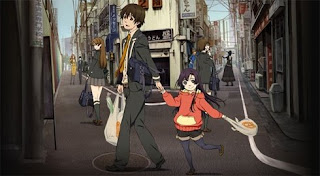 Shinkurou Kurenai is a high school student whose afterschool job is “conflict negotiator.” But unlike Roger Smith of The Big O, rather than summon a giant robot, Shinkurou negotiates with his badass martial arts skills. And he has just received the most awkward mission of his life. Enter Murasaki Kuhouin, the spoiled, six-year-old daughter of Japan’s most secret elite family. Shinkurou’s job: protect Murasaki at all costs.

So begins our light comedic drama of opposites: the kidnapped princess and the timid, hidden beast. Shinkurou’s only choice is to keep Murasaki safe and hidden in his apartment, which is quite the culture shock for Murasaki, who grew up in the xenophobic and traditional Japanese family. With each episode, Murasaki learns the basics of regular society, friendship and freedom.

I will say that Murasaki is a loud-spoken individual and way too wise and compromising to be a realistic girl, let alone a six-year-old. She is fierce and judgmental, but holds enough childlike innocence to grow on you like a little sister. Shinkurou may appear flat at first, but he develops wonderfully, showing his strengths as weaknesses and vice versa. He is victim to his own naivety and post-adolescent claim to invincibility. His is a story of learning to “stand on [his] own power,” to be strong without help from others. In the end, Kure-nai doesn’t define strength and freedom as the inability to lose, but by the wisdom and experience to compromise.

The supporting cast is groundbreaking. Shinkurou’s boss, the stylish femme fatale Benika, will smash her car through a Japanese temple so a six-year-old stranger won’t live without freedom. Shinkurou’s broke and opinionated roommates are great, from Yamie (the black-humored and clothed cynic) to Tamaki (the carefree community college slacker.) Even the ass-kicking near-ninja Yayoi is a closet karaoke star.

What proves Kure-nai’s maturity is its courage to challenge its own message, bitch-slap it, and yank it off its high horse. The world from which Murasaki is liberated is a paradox of morality and tradition. The Kuhouins are a powerful hierarchy of authentic, blue-blooded isolationists, the kind that use women as domesticated wombs. Yet with Murasaki’s kidnapping in the first episode, the very real and complicated moral system of Kure-nai begins to take shape. Responsibility (both for oneself and others), freedom, and love are juggled very skillfully to create a grey world. Even the time-tested moral of “freedom is good, confinement is evil” is questioned and severely criticized in this show.

I have never seen a show like this. Although I can see it having a hard time being accepted by younger audiences and action fanatics, it possesses real depth, weakness, love and humanity. Intense martial arts combined with the dry, nothingness humor of Seinfeld. The art is beautiful and the dialog is quirky, original, and full of surprising humanity. To put a concrete genre on Kure-nai would seem like a constrictive yoke. “Slice-of-life” wouldn’t work because Shinkurou beats up the yakuza. “Harem” would fit because Shinkurou is surrounded by women…except they abuse him terribly...especially Murasaki. “Realism” doesn’t even work because of a bone/horn thing in Shinkurou’s right elbow, Kure-nai’s equivalent to the standard, ultimate hidden technique.

I’d like to quote Murasaki’s concluding monologue as proof of Kure-nai’s poignancy: “A cramped room, a smelly futon, noisy and strange people, a small sky in a crowded city...I got scolded for doing things I thought were natural...but I laughed a lot.”

Is true strength running away and finding yourself, or facing the adversities of home in the hopes of changing them for the better? Whether it’s the cynical humor, the occasional action-packed fight scenes, or the hope for a second musical episode, Kure-nai is a cut unlike any else.