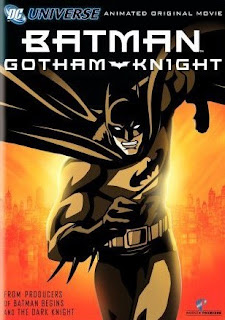 Of all the comic book heroes in America, few are as open to interpretation as Batman. Gotham city was once described by writer Alan Moore as “stranded somewhere between 1930 and 2001 Art Deco,” and its leading crime-fighter has evolved over the years to forever hold our interest. With Batman: Gotham Knight, Warner Bros. tried very hard to recreate the eclectic, spectacle-driven fan-service we remember from The Animatrix.

Story-wise, Gotham Knight is vaguely slapped together as a whole, and the story thread gets thinner and thinner as it goes along. Visually it’s like a gothic jaw-breaker, each background getting better and better. It’s a double-edged bat-a-rang choice between style and substance, and we can clearly see which one came out on top. By the end, Gotham City becomes its own ominous character, engulfing every shot and looming like the ghost of a filthy Post-Depression slum.

Six writers in America gave six directors in Japan the option to show the Dark Knight and his mysterious, dark environment from every conceivable angle, like staring at a carved diamond from every cut. The result is six heavily stylized takes on Batman that fail to tell a solid story. It is not directly anime, nor is it directly Batman: Dark Knight; it’s a hybrid that runs the risk of injuring Batman fans against anime.

Our first story, directed by Shoujirou Nishimi (of Tekkon Kinkreet), is a tribute to the animated series episode "Legends of the Dark Knight," in which four skate-boarding Gotham teens share their stories and views of Batman as he chases down a tech-driven thug. Mecha-bat, Man-bat and vampire-Batman all come together in this mélange. The characters, with their Nishimi trade-marked shifty faces and tiny eyes, almost clash completely with the background.

Secondly there is “Cross-fire,” in which two detectives (fan boys hush) are brought to trust Batman after they are caught in the midst of a gang war cross-fire. Style-wise, Futoshi Higashide presents a world that would work beautifully for Hellboy or Hellsing, but it makes Batman a tad satanic. He walks through fire! The burning kind! That defines badass!

Thirdly the director of the .hack// series (Horioshi Morioka) gives us a nearly shojo-style pretty-boy of Bruce Wayne as he prepares to test a new bullet-deflection system on some thugs. For me, this was the first redeeming chapter of the story as we not only see Bruce Wayne’s side of Batman, but also the driving sympathy and unexpected compassion that defines the Dark Knight.

Part four was written by Batman: Beyond and Dark Knight writer David S Goyer. Visually, we travel with Batman into the underground hollows beneath Gotham City to fight Killer Croc and the Scarecrow. If this were expanded into the whole movie, I would be one pleased little otaku. Batman becomes something fantastic here as his tech and classic vanishing act take the cake and overshadow the Scarecrow’s new, Gothic Frankenstein costume. If anything, it blends horror with urban mythology into a great visual piece.

"Working Through Pain" shows Bruce Wayne training in India (that’s right, India: deal with it) through a series of flashbacks. In this part, a wounded Batman performs self-surgery on himself as he tries to navigate his way out Gotham’s deadly sewers. As a stand-alone piece, this is magnificent. The writing combined with relatively unknown director Toshiyuki Kubooka creates great film transitions and symbolism. Bravo. Pain and rejection are the guiding forces in this story, the spiritual side of Wayne’s journey in becoming Batman. Huge parallels are drawn between Bruce’s personal rejection and his lady trainer’s social rejection. The scene where Batman wades through garbage and finds a pile of guns is shocking and full of pathos. It’s simple, but "Working Through Pain" is both human and compelling.

Finally, "Deadshot" is about Batman taking down a villainous assassin who (for this very anti-gun piece) is the perfect villain. Arrogant, merciless, and more pro-gun than Charlton Heston, Deadshot’s story is far too short for this fifteen minute visual masterpiece. Sadly, story-wise, it is simply Golgo 13 getting sucker-punched by Batman.

In the end, we see every side of Batman. World’s greatest detective, billionaire playboy, tech wizard, dark angel of mercy, self-driven philanthropist, and vigilante – they all come through in this piece. I fail to see this as an over-budgeted failure on Warner Bros. part, even considering the severe downplay on the Japanese directors. (Show some love, WB!) I guess you could say that too many cooks over-spiced the soup and abandoned the chance to tell one solid story. Instead we leap through time and places in Batman’s career.

The voice acting is top-notch, and you'd have my permission to go full-out Itachi on me for not mentioning the great work (as always) by veteran voice-actor, Kevin Conroy. He syncs up well with the Japanese lip-action and delivers yet another spine-tingling performance as the Dark Knight.