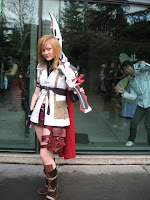 Over the past weekend Square Enix hosted their DKS3713 (what the hell?) fan event in , where they made a few big announcements and showed off some of their upcoming titles. As far as announcements go, it’s no surprise that Final Fantasy VII: Advent Children is getting a Blu-ray release. What is surprising, however, is that this release will include both a bonus disk of Final Fantasy Versus XIII and Final Fantasy Agito XIII videos as well as a playable demo for Final Fantasy XIII itself.

Square Enix also revealed, as you may have guessed from this article's title, that both Parasite Eve 3 and Final Fantasy Agito XIII will be arriving on PSP. We don't have any release date information yet, but it's great to see these two titles getting released on a medium the rest of the world can enjoy. I’m sure everyone here knows the Final Fantasy series well enough, but if you’re unfamiliar with this Parasite Eve business then I would suggest you do yourself a favor and look up this bizarre survival horror gem from the PS1 era.