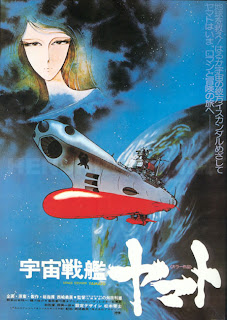 The classic franchise revolves around a spaceship created from the remains of the rebuilt WWII Japanese battleship "Yamato." It has been credited by many fans both Japanese and American as the reason they began watching anime.

Yamato has been embroiled in copyright disputes since the release of its final movie, barring producer Yoshinobu Nishizaki from creating this project, which has been in the planning stages for over a decade. Rights have been split among Nishizaki, co-creator Leiji Matsumoto, and the Tohokushinsha Film Corporation, and while many fans credit Matsumoto with the creation of the series, the controversial Nishizaki has won the ability to create Rebirth.

Nishizaki's Fukkatsu-hen has also seen a rebirth of its own through American rights-holder Voyager Entertainment. Comicbook artist and Yamato "superfan" Tim Eldred was commissioned to write and draw a webcomic based roughly on both Nishizaki's concept for Fukkatsu-hen and Voyager's Star Blazers continuity, titled Star Blazers Rebirth. The comic can be read for free on the official Star Blazers website.