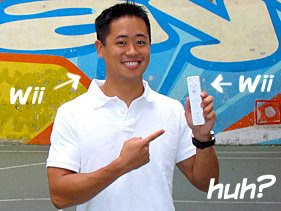 When Nintendo unveiled their "revolutionary" new console name two years ago, they had no idea that somebody else already had the rights to it. Wii Yatani, a Japanese-American gamer living in New York City, has had the name for 26 years. Yes, he has known the pain of "wee-wee" jokes that Nintendo has suffered through for a mere 2 years.

The MTV Multiplayer blog has an extensive post up about Wii's experience (no, not the "Wii experience"), detailing his life of Wii jokes, and how the Wii has changed his life. (People can finally spell his name) Now, we're going to finish up this post before we all get confused about Wii and Wii and other people named Wii and their feelings about Wii and... We give up.

[via Joystiq and MTV Multiplayer]