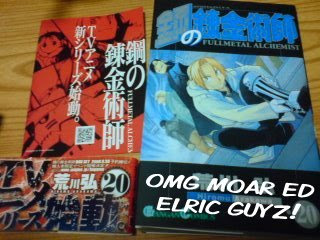 The wraparound jacket of Hiromu Arakawa's Fullmetal Alchemist manga is reportedly confirming the existence of a second TV anime adaptation of the hit series. Fullmetal Alchemist fans first heard about the possibility of a second anime a month ago when a document supposedly listing FMA animator Yasuhiro Irie as "Iron/Fullmetal 2 director" surfaced on the Internet. (It also contained confirmation of a Darker than Black sequel)

BONES, the studio behind FMA, quickly denied the existence of the document, but confirmed to the Anime News Network that they were interested in pursuing sequels to both series. Before people cry foul on this story as yet another rumor, this is being confirmed through the official Japanese release of Arakawa's manga, so it's surely a legitimate announcement. The question is: what does this mean for the rumored Darker than Black sequel?

There are no further details on the new series as of right now, but keep your browsers locked on Ani-Gamers for more updates on this breaking story.