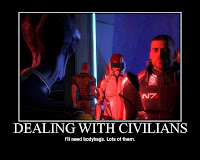 In an interview with MTV’s Multiplayer Blog, BioWare co-founder Greg Zeschuk (zest-chuck?) hinted strongly at bringing some more downloadable content to their space opera Mass Effect. Its been about five months now since the first piece of DLC, Bring Down the Sky, went live on 360 for 400 points, and was later made free with the PC release of the game. Since then, fans across the net have been wondering if this was just a one-time affair, now Greg Zeschuk is here to shed some light on the subject.


“Well, we said it was a trilogy, so there’s some stuff happening. We’re also looking at some other post-release content. We’re working away. BioWare’s pretty busy these days… With everything we build now, we want to have this long-term relationship with the customer and always have something for them to try. So we’re definitely looking at that for Mass Effect.”

Definitive? Not exactly, but at least it’s something. It sounds like they’re trying to decide whether to release these extra missions they’re working on now as DLC now or save them for Mass Effect 2 where they’ll receive more polish and fine tuning.