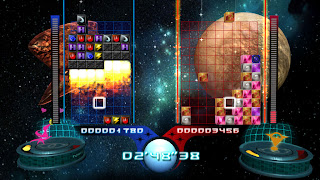 It's been a long time since I last picked up Meteos, Q Entertainment's fantastically unique DS puzzler released near the beginning of the system's lifespan. Fans like me awaiting its DS sequel may be excited (or disappointed) to find out that Q will be bringing Meteos Wars, the newest entry in the series, to Xbox Live Arcade. According to Joystiq's post on the game, it will feature a two-player mode wherein players rack up points to fill a gauge and unlock a special attack. The game will come to America for 800 MS points ($10) this October.

Q tried previously to revitalize the Meteos franchise with a bitterly-received Disney-themed DS sequel. Meteos Wars looks like it has a lot of potential on XBLA, but I for one have doubts about the original DS control scheme being rewrought for a normal gamepad.