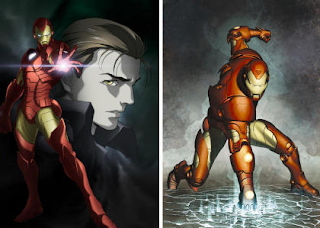 The renowned anime studio behind Death Note, Metropolis, and Paprika will be working with American comicbook giant Marvel to create four anime series based off of some of Marvel's properties, according to a Marvel press release. This "cross-cultural adaptation of the Marvel Universe" will include a spring 2010 series featuring Iron Man and Wolverine, among others. (The image to the right features the Madhouse Iron Man on the left and Marvel's Iron Man on the right)

No other details have been given, except that each series will contain twelve thirty-minute episodes and Marvel plans to create more if sales are favorable. Oddly, Marvel has not discussed licensing these series in the United States, though the "worldwide audience" may be in reference to a global release plan.

It is almost certain that Marvel has made this decision in response to Warner Bros. and DC Comics' production of the Japanese-animated title Batman: Gotham Knight. (Check out Uncle Yo's review) However, the distinct difference between Gotham Knight and these new Marvel series is that Marvel has given total creative control to Madhouse, so that all of the writing and directing will be done in Japan. Perhaps elitist anime fans will finally cease their anti-American ways and give in to American comicbook characters... Or perhaps not.

Check out the full press release after the break.

NEW YORK--As part of the company's aggressive strategy to grow the exposure of its character franchises in international markets, Marvel Entertainment, Inc. is partnering with Madhouse - one of the top Japanese animation studios in the world - to create brand new characters inspired by the Marvel Universe for the Japanese market.

Working closely with Marvel, Madhouse will produce cutting edge Japanese anime series based on Marvel's world-renowned character library for the Japanese market. The characters will be adapted visually, using the unique style of Japanese anime, and their back stories and histories will interweave the local culture and history of Japan, with an eye toward making their mythology more relevant to the Japanese audience. This collaboration will result in a completely new character base, which will eventually cross-over into the current Marvel Universe.

“Marvel has continuously looked to push the boundaries with the Marvel Universe and seek new mediums for our characters. Madhouse is helping us expand the Marvel brand with a truly global vision tailored to themes and artistic styles popular in Japan, creating a uniquely localized and cross-cultural adaptation of the Marvel Universe,” said Simon Philips, President, International & Worldwide Head of Animation, Wireless & Gaming for Marvel Entertainment. “With over 35 years of experience developing and producing worldwide entertainment hits, we are confident Madhouse will be able to translate the vision of the Marvel Universe through the unique anime style, to create captivating new entertainment that will thrill both new and old fans alike.”

Madhouse is currently in production on the first of four new series (12 x 30 minutes), which are scheduled to launch in spring 2010. The initial series will feature characters including Iron Man and Wolverine, among others, and Madhouse will ultimately look to adapt the entire Marvel Universe, creating in essence a whole new character base for Marvel.

“We are incredibly excited to have this full collaboration with Marvel to create a completely new world that has never been done before in the Marvel Universe. This will be the first time there will be a full Japanese anime style for Marvel, and the Madhouse creative team is fully engaged to bring this to a worldwide audience,” said Jungo Maruta, president and CEO of Madhouse Inc.

The Marvel anime series will debut on ANIMAX, the first and largest 24-hour network dedicated to anime.

Additionally, Marvel and Madhouse will be exploring related merchandising initiatives to support the new series.

With a library of over 5,000 characters built over more than sixty years of comic book publishing, Marvel Entertainment, Inc. is one of the world's most prominent character-based entertainment companies. Marvel utilizes its character franchises in licensing, entertainment (via Marvel Studios and Marvel Animation) and publishing (via Marvel Comics), with emphasis on feature films, television, DVD, consumer products, video games, action figures, role-playing toys and promotions. Marvel's strategy is to leverage its franchises in a growing array of opportunities around the world.

Madhouse, Inc., established in 1972 with offices in Tokyo, Los Angeles and Beijing, is one of the top animation studios in the world working exclusively with some of Japan's top anime directors. They have created many well-known titles such as worldwide hits NINJA SCROLL, VAMPIRE HUNTER D, TRIGUN, TOKYO GODFATHERS, and METROPOLIS, Japanese successful TV series such as DEATH NOTE and NANA, as well as PAPRIKA (an Official Selection at the 2006 Venice Film Festival) and THE GIRL WHO LEAPT THROUGH TIME (2007 Japanese Academy Award for Best Film – Animation)