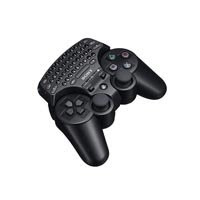 Sony Computer Entertainment of America had three big hardware announcements to make today during the Games Convention in . First was the announcement of the "PSP-3000," which is the second redesign of the PSP thus far. This latest model, while still looking very similar to the other two models, is said to include a brighter LCD screen which should help visibility in light places as well as provide more dynamic colors and a higher contrast ratio. Also included is a new microphone which will allow for multiplayer communication and Skype calls.

The new PSP will be bundled first with the upcoming Ratchet & Clank: Size Matters game available in October of this year for $199.99, and will be released on its own for $169.99 later this year.

Second is the announcement of the wireless PS3 keypad, which will connect to the top of your SIXAXIS or Dualshock 3 controller. This new device will be Bluetooth compatible and will feature hotkeys which will take you to the XrossMediaBar. Expect to see the keypad hit retail this November along such community focused titles as LittleBigPlanet and Playstation’s Home. A price has not yet been announced.

Last but not least is the announcement of the new 160GB SKU of the Playstation 3. The new console will be available as a limited-edition bundle package with Uncharted: Drake’s Fortune, a Duelshock 3 controller, and a voucher for a copy of Pain on PSN. All of this will be made available in this November and will retail for $499.99