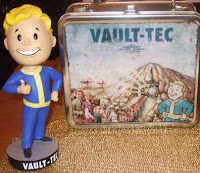 Bethesda Game Studios, Fallout 3’s developer, has confirmed that their post-apocalyptic action RPG will be hitting retail in North America on October 28th, 2008 and in on October 31st, 2008 for the 360, PS3, and PC. The game has come under some fire recently from the Australian OFLC ratings bureau who denied the game a rating, effectively banning the title from retail, for the referencing of drug use in the game. has since decided to cut those references, resubmitted the game to the OFLC, and met with its approval.

Vlatko Andonov, 's president, has high hopes for the success of Fallout 3, stating: "We are very excited to let gamers get their hands on Fallout 3, the latest chapter in this beloved and highly acclaimed franchise. To meet the huge demand for this title by our fans worldwide, we are planning one of the biggest launches of any game released this year."