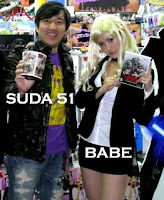 Yesterday, Electronic Arts announced plans to partner up with Grasshopper Manufacture (Killer7, No More Heroes) to release an unnamed horror game for the PC, PS3, 360, and Wii. In addition, the title will be produced by Resident Evil creator Shinji Mikami, directed by Goichi "Suda51" Suda, and will involve Q Entertainment (Lumines, Meteos) in some capacity. Details are still scarce at the moment but, as IGN points out, this title could be “Kurayami,” a horror game that Grasshopper Manufacture announced for the PS3 two years ago.

In the press release, representatives from EA and Grasshopper Manufacture expressed their excitement at the chance to work with the other. In particular Frank Gibeau, President of the EA Games Label, states that: "It is an honor for EA to sign Grasshopper Manufacture and help bring their new franchise to gamers worldwide…Grasshopper Manufacture is a world-class studio and, within the EA partner program, they stand alongside some of the world's most revered independent studios." So now, as noted by Joystiq, we’re talking about a franchise...