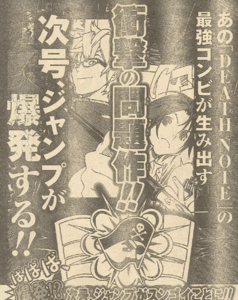 Tsugumi Ohba (writer) and Takeshi Obata (artist), creators of critically acclaimed and intensely popular manga series Death Note, have confirmed through Shueisha's Weekly Shonen Jump that they are working together on a new manga series titled Bakuman, to be premiered in the same magazine on August 11th.

The only information that has been given is a cryptic statement that the new series will be "explosive." (A clear play on words, since "bakuhatsu" is Japanese for "explosion") While this series will only be premiered in Japan on Augest 11th, Viz's Shonen Jump magazine is sure to pick it up, considering the massive popularity of Ohba and Obata's Death Note. Make sure you give it a look when it legally comes out in America, because we know nobody here will be reading any scanlations...