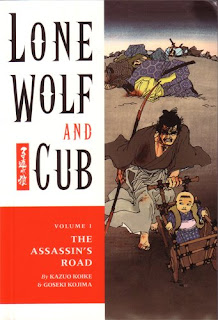 A scruffy, middle-aged man walks down the dirt path. He looks like a wandering samurai, or "ronin," but he is in fact a ruthless assassin. In one hand he holds a sword. In his other, he pushes a carriage holding a small, gurgling baby. If you can picture this, then you understand the very intense feeling held inside of Lone Wolf and Cub, the most prominent of all the works of gekiga writer Kazuo Koike and artist Goseki Kojima.

I said it in the last paragraph, but I will say it again: This is an intense manga. Hell, you'll probably hear me say it a couple more times in this review, simply because little else can describe Lone Wolf and Cub. Ittou Ogami is a wandering assassin. Unlike a traditional Japanese assassin, however, Ogami carries his baby boy, Daigoro, with him at all times. Often, Daigoro is even knowingly (and sometimes willingly) a part of Ittou's killings. Together, the two are known to the people of Tokugawa era Japan simply as "Lone Wolf and Cub."

Kazuo Koike and Goseki Kojima are well-known for having worked together many times on manga projects, including Samurai Executioner and Path of the Assassin. This title follows the same general style as their other works, as it centers around a hard-boiled depiction of samurai, ronin, and other swordfighters in ancient Japan. Most readers will immediately be struck by Kojima's high-constrast, frantically lined art, but that is really only half of Lone Wolf and Cub. Without Kazuo Koike's brilliantly crafted episodic stories, this manga would be nothing but pointless bloodshed.

Koike starts nearly every chapter with the Ogamis simply wandering until they run into someone else, whether it's a yakuza group, local lord, or even resident of a hot springs village. Some way or other, it turns out that Ittou runs into a client or assassination target along the way, resulting in a fight before the end of the chapter. The formula is a bit repetitious, so I could understand the concept getting boring over the fifteen volumes that this manga spans.

Even so, in this first volume, Koike's writing for each episode remains surprisingly fresh. Most of them are pretty good, though there are a couple of real gems. "A Father Knows His Child's Heart, as Only a Child Can Know His Father's" is when we first see Daigoro used as a legitimate distraction during Ittou's assassinations. Ittou manipulates a military officer (and assassination target) into fighting a deadly duel in "Suiou School Zanbatou." In "Wings to the Bird, Fangs to the Beast," Lone Wolf and Cub are caught in the takeover of a hot spring town, where Ittou must endure insult and injury in order to rescue the other hostages. That particular episode contains a brilliant instance when, in true gekiga fashion, Ittou has sex with a captive prostitute in order to save her life from one of the ruthless killers in control of the town.

"Waiting for the Rains" is easily the slowest of the nine stories. It follows Lone Wolf and Cub's attempt to kill a man who abandoned his wife years ago. By waiting for weeks at the ailing wife's home, the assassin eventually meets his still-faithful target, and takes him out in a dramatic, wordless sequence. This silent battle only lasts three pages, making "Waiting for the Rains" the least dynamic story of the collection. "Eight Gates of Deceit," chapter seven of the novel, is a perfect example of when Koike's storytelling begins to wear a little thin. It revolves around a group of eight female assassins who attempt to kill Lone Wolf and Cub... and that's it. There is not much more in this chapter than swordfighting, a stark reminder that when Koike and Kojima rely only on testosterone-pumped fight sequences, the manga suffers.

My only true complaint for Kojima's visceral art is that it sometimes becomes excessively complex, with far too many lines on the page. This isn't helped by Dark Horse's decision to publish their volumes of Lone Wolf and Cub on even smaller paper than the typical Viz manga. There are still a couple panels here and there in Lone Wolf and Cub that I can't make any sense of, which is never good in a manga where cinematic action storytelling is the goal.

Dark Horse's release is commendable, though attempts to Americanize Lone Wolf and Cub have slightly dulled its teeth in the world of manga sales. The manga is flipped, and the cover art is mysteriously drawn by Frank Miller and Lynn Varley. (Why wouldn't they get Kojima's original cover art, unless perhaps they wanted to make it palatable to American audiences?) Luckily, Dark Horse also made up for these errors, since the back contains extensive honorific explanations, biographies of both Koike and Kojima, and even an essay titled "The Ronin Report," by Tim Ervin-Gore.

When it comes down to it, Lone Wolf and Cub differentiates itself from other gekiga manga such as Golgo 13 because it has a message, and that's what makes this worth picking up. The stories might not always be paced correctly, and the art may be hard to figure out, but by the end of the first volume, the reader has picked up on the harsh sense of honor and justice in the lives of both Ittou and Daigoro, as well as the very Japanese idea that honor transcends even age. After all, as an attendant points out at the opening of chapter three, "The child of a wolf, my lord, is still a wolf."