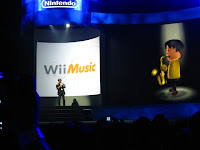 Today Nintendo held their E3 press conference at the convention center where they displayed an eclectic array of titles for both the DS and Wii.

Reggie, Miamoto, Iwata, and Nintendo’s VP of sales, Cammie Dunaway, all made an appearance to talk about how Nintendo has created a “paradigm shift” within the industry. They also talked about how Nintendo needs to continue innovating and pushing the industry forward in the years to come. Here were the major gaming announcements:

Shaun White Snowboarding (Wii): an Ubisoft title using the Wii’s balance board which is set to arrive by the year’s end exclusively on the Wii.

Animal Crossing: City Folk (Wii): set to arrive on the Wii by year’s end, the game will include a new “Wii Speak” voice chat feature as well as the ability to send messages using a full keyboard in-game.

Guitar Hero on Tour: Decades (DS): set for sometime this Fall, the ability to share songs between the two DS titles was mentioned.

Spore Creatures (DS): touted as the only non-PC Spore title that will be available this year, includes the Spore creatures creator and the ability to trade creatures.

Grand Theft Auto: Chinatown Wars (DS): another title for this holiday season, this title will be set in and feature the “free roaming” gameplay of the previous GTA titles.

Cooking Navi (DS): set for November 2008, not so much a game as it is an interactive cook book.

Wii Sports Resort (Wii): plans are for a global release next Spring, the mini-games that were shown were: flying disk, a Wave Race 64-esq game, and a sword fighting game.

Wii Music (Wii): no release date plans were mentioned, the game was said to include 50 instruments, including drums, sax, piano, guitar, and violin. There can be up to 4 players at a time and no grades or scores are given during the game, it’s all about just playing the music and having fun with your friends. The ability to record video and create your own music video was mentioned.

To go back to Wii Sports Resort for a moment, a new device for the wii-mote was announced that will be included with this game: the Wii Motion Plus. Basically, it’s a small device that plugs into the back of your wii-mote and increases the precision and accuracy of the device.

Also worth noting was a comment made by Nintendo’s president Satoru Iwata who said that the teams that brought us the Mario and Zelda titles shall “bring new titles to the Wii.” How will these titles manifest themselves, we shall have to wait and see.