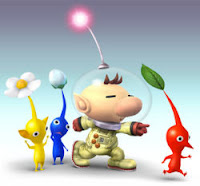 An announcement that would have made a lot of people feel better about Nintendo’s press conference was revealed yesterday evening during Nintendo’s Developer Roundtable event. Nintendo mastermind Shigeru Miyamoto confirmed that a new Pikmin title is on its way during a Q&A session at the end of the roundtable event.

During the Wii Sports Resort Q&A Nintendo’s brass artfully dogged some questions concerning the Wii MotionPlus and whether it was an admission by Nintendo that the original Wii-mote’s sensitivity was sub-par. Finally, while talking about Wii Music, Miyamoto mentioned that, of the 50 songs available in the game, most of them will be public-domain tracks but some will be “popular” licensed music. Hopefully that means we’ll get something a little catchier than “Yankee Doodle Dandy.”