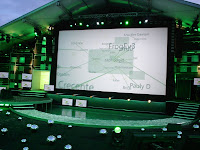 Yesterday, Microsoft flexed their gaming muscle during their E3 press conference in . Included in their showing were a few exclusive downloadable content deals, several release dates, and one big announcement that’s blowing up the internet (you know that one). Here are the gaming highlights from yesterday’s monumental event:

Fallout 3: exclusive downloadable content confirmed for 360 and Games for Windows.

Gears of War 2: release date set for November 7, 2008. The new “Horde” mode, a co-op endurance mode where 5 players are pitted against a relentless onslaught of enemy forces, was also shown.

Fable 2: release date set for sometime in October, 2008; online co-op was confirmed and will be accessed in-game by approaching floating purple orbs which represent the location of your friends in their game.

Lips: from developer iNiS (Elite Beat Agents), Lips is shaping up to be a karaoke game similar to Sony’s SingStar - with one little addition: you can use your own music! Wireless microphones were also used during the demo and there was talk of motion sensing functionality.

Portal: Still Alive: this pseudo-sequel was confirmed as an exclusive for Xbox LIVE and is set to arrive sometime in 2008. The game is set to include new levels, challenge modes, achievements (of course), and the original single player mode as well.

XBLA: Geometry Wars: Retro Evolved 2 set to arrive August 6, 2008 with a slew of new content including 4 person local co-op, along with 5 new game modes; Uno Rush was announced, Galaga Legions is coming from the folks that brought us Pac-Man Championship Edition, a South Park game (rumored to be a port of the N64 title), and Banjo-Kazooie (which really is a port of the N64 title).

JRPG’s: Infinite Undiscovery dated September 2, 2008; Last Remnant slated for a timed 360 exclusive for this holiday season; and : The Last Hope set for some time in Spring 2009.

Final Fantasy XIII: the BIG one, confirmed for 360 as Vampt Vo reported! While no official release date was given, the title is set to be released simultaneously on both the 360 and PS3 in Europe and . Interesting to note that Japan, which will be receiving this title first, was left out of this simultaneous launch window and it looks like there will be some delay between the Japanese PS3 exclusive release and the Europe/America duel release. Also worth mentioning is the Final Fantasy Versus XIII is still slated as a PS3 exclusive at this time.

Gaming announcements aside, Microsoft also announced a deal with Netfilx which will allow Xbox Live Gold members, who are also Netflix subscribers, to access the entire Netflix movie database from the console at no additional charge. A reworking of the 360’s dashboard was shown, as well as the new Avatars which shall function pretty similarly to Nintendo’s Miis (you’ll be able to customize them and use them in certain games).

It was a strong showing by Microsoft indeed.Now, how will Nintendo and Sony stack up?