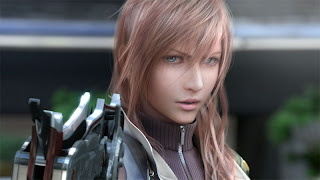 At their E3 press conference today, Square Enix officially announced a port of Final Fantasy XIII (that's thirteen FYI) to Microsoft's Xbox 360. Why is this important you ask? Well, the central Final Fantasy games (yes, excluding Crystal Chronicles, etc.) have been exclusive to Sony's consoles since the iconic Final Fantasy VII. This marks the most notable RPG to be released on the Xbox 360 since Microsoft began actively seeking out the genre on their console.

This announcement, which has been discussed for months as a strong possibility, means that Microsoft is now in a position to combat the Playstation 3's growing sales numbers, seeing as the latter only retains one major, established exclusive franchise: Metal Gear Solid. The problem? Japan, the country in which Microsoft is seemingly unable to sell Xbox 360 consoles, will not get the Xbox 360 version, at least not according to the information Square has released. Since Japanese gamers are the primary and most vocal fans of Final Fantasy worldwide, this is sure to hurt Microsoft's plans for dominating the Playstation 3 and building its status in Japan.