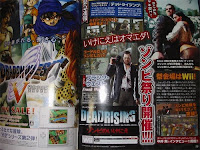 Broken in this week’s Weekly Famitsu magazine, Capcom’s zombie-bashing extravaganza, Dead Rising, is making its way to a Wii console near you. It's strange that this announcement was absent from both Nintendo and Capcom’s press conferences, and even stranger still that this title still hasn’t seen a PC release (Devil May Cry 4 and Lost Planet say “hello”).

From what can be gleamed in the Famitsu article, the title will be a port of the 360 game, with an emphasis on maintaining the massive zombie hordes of the original given the Wii’s, well, limitations. Naturally, there is also talk of some Wii motion control functionally as well. Hey, a little motion control didn’t hurt Resident Evil 4 now did it!