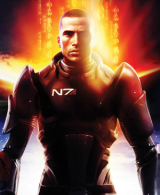 I've got bad news, good news, and more good news; I'll start with the bad news: Chris Priestly, the community coordinator for BioWare stated on the Mass Effect Forums that Mass Effect PC will have to experience a slight delay from its original May 6th release, to May 28th, and June 6th (for Europe). Reason being is pretty simple, but you can over complicate it if you wish: they're doing some extra playtesting, polishing, and overall 'just making sure everything works,' so that quality is ensured.

And now for some good news: Soon after, BioWare announced a new HUD design for the PC version to heal the broken hearts bent on enjoying the crap out of Mass Effect on May 6th. It can easily be accessed with a simple slap on the space bar; allowing you to select your biotics, guns, etc. for yourself and squad members. To be perfectly honest, though, a new HUD really doesn't at all mend for annoying delay (however insignificant it was) caused by the original HUD.

The last of the good news is that I just know BioWare's only delaying it so it could match my birthdate.